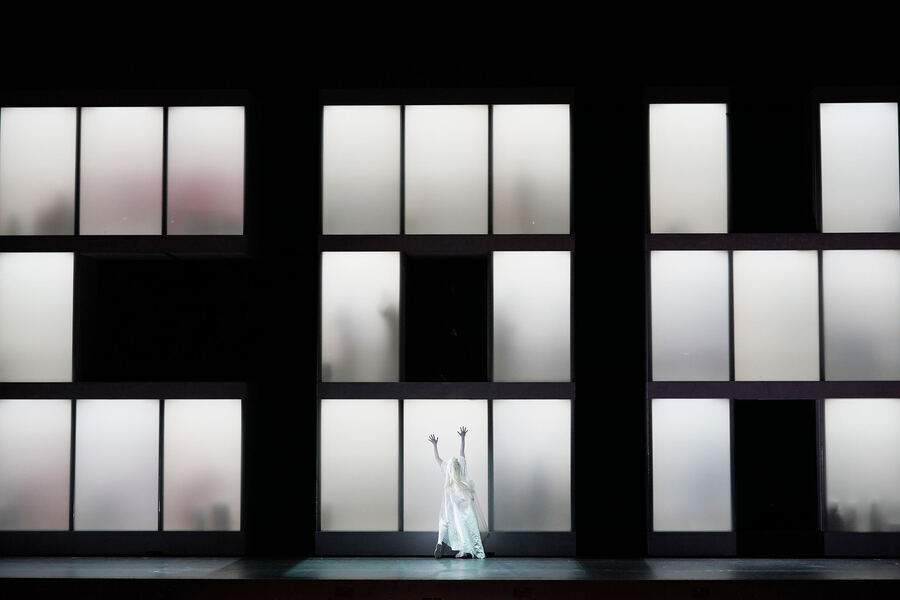 The young captain of the guard Narraboth's gaze lovingly follows Salome, who is feasting with the guests of King Herod. Herodias' page, amazed at the unusual moon, warns his friend of danger. From the dungeon the voice of the prophet resounds, announcing the birth of the Son of God: "When He comes the desolate places shall rejoice, the eyes of the blind shall see the day and the ears of the deaf shall be opened."

Followed by the lustful glances of her step-father, Salome leaves the feast. The threatening speeches of Jokanaan awaken her curiosity, and the princess wishes to see the prisoner. She gently asks Narraboth to do this and he, unable to resist her charms, breaks the tetrarch's orders. Jokanaan denounces Herod and Herodias, covered in sweat and tears, and he calls on them to repent. Desiring to be caressed and kissed, Salome tries to approach the prophet, but he spurns the "daughter of Sodom". Amazed at what he has seen, Narraboth killed himself. Cursing, Jokanaan retreats to his cell.

Haunted by nightmarish visions bordering on hysteria, the tetrarch seeks out his step-daughter. He offers Salome wine and exotic fruit as well as a seat at the feast next to him. Yet she coldly rejects his advances. Again the threatening prophecies of Jokanaan are heard. Herodias asks for him to be given to the Jews, but Herod is fearful of issuing such an order as he considers Jokanaan to be a holy man. The Nazarenes speak of the miracles of the Messiah which they have witnessed. In the hopes of distracting himself from his gloomy thoughts, the tetrarch convinces his step-daughter to dance for him and, for the pleasure, he will grant her every wish. Taking Herod on oath, Salome begins her dance of the seven veils.

Herod is delighted and he asks what the reward should be. Salome demands the head of Jokanaan. Sensing impending doom, Herod tries to pay by other means, but the princess insists. The tetrarch is forced to fulfil his promise. Salome is given Jokanaan's head.

For one hundred and twelve years the opera directors from all over the world have been puzzling over the answers to the following two questions: (1) who are Jokanaan and Salome whose collision leads to a catastrophe; (2) what is the significance of the 10-minute Dance of the Seven Veils, which Salome performs at a culminating point in the story. It simply cannot be that Jokanaan is just a prophet, Salome – just a Jewish princess, and the famous dance – just a mediocre Eastern striptease. The director Marat Gatsalov, whose work is likely to be familiar to the drama theatre lovers, made his opera debut with this production. He has decisively cut through all the traditional clichés which have been associated with Salome for over a hundred years. The new production has no place for a dance with seven fabric veils, palms under the scorching Judea sun, or, for that matter, any items belonging to that place and epoch. The action might take place anywhere at no particular time, in the space created by set designer Monika Pormale, in the gigantic skyscrapers shaped like letters. What has taken the place of the Dance and Jokanaan’s head cannot be described for it can only be seen.
For one hundred and twelve years the best performers in the world have been selflessly throwing themselves into the depths of the volcano that is hidden in Richard Strauss’s Salome. Valery Gergiev and the Mariinsky Theatre have accepted Strauss’s challenge for the third time, and once again they have masterfully tamed the tempestuous musical element raving for an hour and a half.

Running time: 1 hours 40 minutes
The performance without an interval