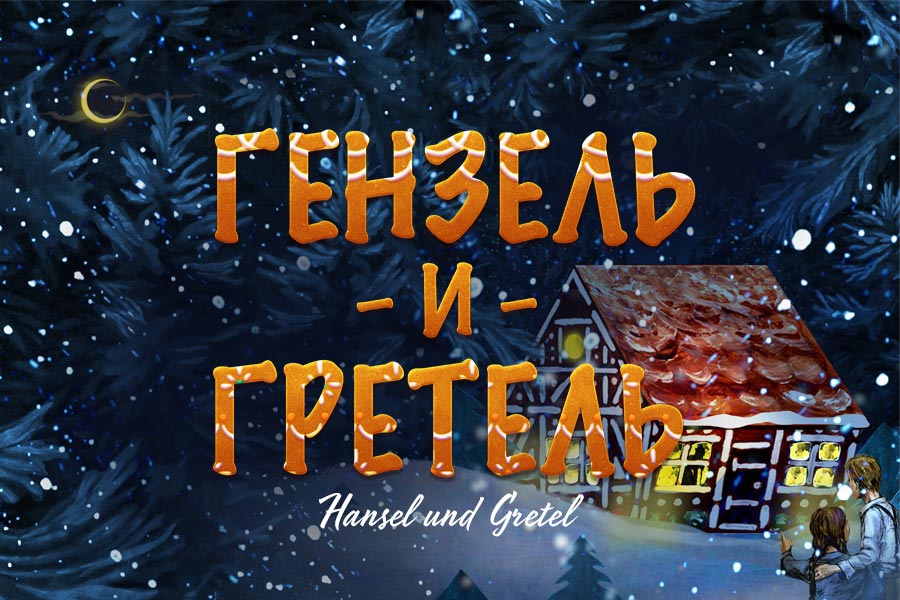 Act I
At Home
Vanya and Masha, the broom-binder’s children, are sitting in his modest hut. They are at work, though tormented by hunger as they have had nothing to eat for weeks other than dry bread. Masha reveals a secret to her brother – she has seen a jug of milk brought by a neighbour and so today they will have porridge. In joyful anticipation of the dinner to come the children begin to make merry, sing and dance and their weary mother catches them in the act. Annoyed by the children’s antics, she reaches for a switch to thrash them but accidentally knocks over the jug of milk on the table. Beside herself in rage she sends Vanya and Masha into the forest in search of berries.
The drunken broom-binder returns home. Today business has been good and he has brought back a basket full of food. When he discovers what has happened his mood suddenly changes. The father recalls a superstition that lost children sometimes walk into the hands of an Evil Witch living by the Black Rock in the forest. She lures children to her in order to make gingerbread out of them and eat them. The anxious parents set out into the forest.

Act II
In the Forest
Meanwhile, the children have managed to gather a full basket of berries. Masha has made a wreath and tries to put it on her brother, but he resists, saying that flowers are not for men. Without noticing, the children eat all the berries they have collected. It is now dark in the forest and the glade that had so recently seemed so appealing becomes menacing. The children have lost their way and in terror they embrace one another. The Sandman, the dream fairy, appears and calms the lost children promising them sweet dreams. Vanya and Masha recite an evening prayer and fall asleep. Angels appear to guard the children’s sleep.

Act III
The Witch’s House
The Good Fairy wakes everything living in the forest. Now alert, Vanya and Masha tell each other of their dreams – it turns out that their dreams have been the same: of Angels guarding their sleep.
Suddenly the children come across a charming house made of gingerbread and jam. Breaking off a piece, they hear the voice of the owner – the old Witch. Through flattery and false tenderness she invites them in but before she brings her plan to fruition she invokes a terrible curse. Vanya and Masha are now the Witch’s prisoners. They understand that the old woman is feeding them up in order to eat them later. When the Witch asks Masha to get into the oven to clean out the corners the girl asks her to show her how it must be done. As soon as the Witch sticks her head into the oven the children shove her inside and shut the door.
Vanya and Masha are surrounded by children that the Witch once transformed into gingerbread. The curse is still active as their eyes remain closed. The brother and sister embrace them all to release them from the curse.
At just this time the Mother and Father find Vanya and Masha. The Witch in the form of a massive piece of gingerbread is removed from the oven. The Father says that evil never goes unpunished. In a general chorus all praise God who never abandons anyone in trouble and takes care of everyone in times of trouble.

The enchanting musical fairy-tale by Engelbert Humperdinck (1854 – 1921) is well known throughout Europe – it is a standard repertoire piece at Christmas-time. The idea of making a children’s production to be performed at home based on the horror fairy-tale by the Brothers Grimm belonged to the composer’s sister Adelheid Wette who also wrote the libretto. Having evolved into a full-scale adult romantic opera, Humperdinck’s spicy fairy-tale was popular not just in Germany (where it was premiered in 1893 in Weimar under the baton of Richard Strauss) but in Russia too.
In Russia Hänsel und Gretel was first staged in St Petersburg at the Panayev Theatre (1896) and later in Moscow, at the Bolshoi Theatre (under the title of The Gingerbread House) as well as at the Mamontov Opera. At the Mariinsky Theatre Hänsel und Gretel was first performed on 24 October 1897. Then the opera was performed in Russian albeit using the original title, the translation having been produced by Yekaterina Kletnova.
“The music of this opera is an unusual combination of colours – music intended for children together with a very late layering representing the quintessence of the Wagnerian style, assimilated by all German composers of the age”, noted the critic Mikhail Ivanov of The New Age. “As a brilliant theoretician and Wagnerian, Humperdinck created a complex polyphonic fabric, in particular when indicating the stage positions. But the demands of the plot forced him to turn to children’s songs (even including the famous Ach, du lieber Augustin), waltzes and so on, which imbued his opus with the character of a short operetta. For children and admirers who do not make any particular demands, this lightness of Humperdinck’s music, despite the heavy artillery he has developed, will guarantee success.”
Leila Abbasova

Running time: 2 hours 15 minutes
The performance has one interval