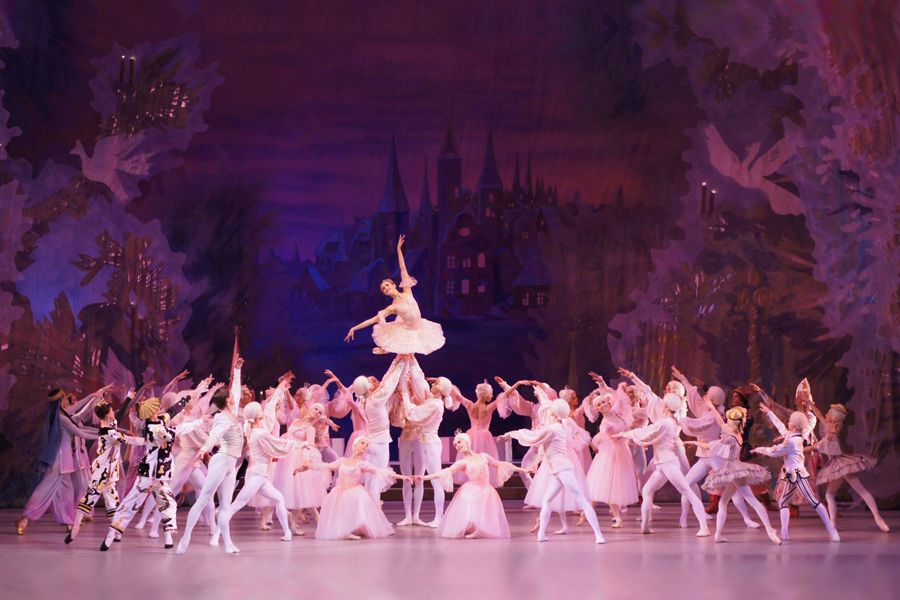 ballet by Vasily Vainonen set to music by Pyotr Tchaikovsky

Music by Pyotr Tchaikovsky
Libretto by Marius Petipa based on the story by E.T.A. Hoffmann
Choreography by Vasily Vainonen (1934)
Set Designer: Simon Virsaladze (1954)

Act I
The action takes place in an old German town at the start of the last century but one. Night is falling. It is Christmas Eve and the streets are busy and festive. Drosselmeyer, an eccentric inventor and toy maker loved by children, is among those invited to see the Christmas tree at the large, brightly lit house of Herr Stahlbaum.The drawing room in Herr Stahlbaum’s house is beautifully decorated. The guests assemble. Drosselmeyer enters carrying presents.The party is ready to start. The children rush in. There is a game of blind man’s buff and Drosselmeyer takes part. He is blindfolded. Masha, Herr Stahlbaum’s young daughter, is the first to be caught. After the games, there is dancing. Now dressed as a magician, Drosselmeyer does magic tricks and puts on a puppet show – The Mouse King Wishes to Kidnap the Princess, but the Courageous Nutcracker Kills the Mouse King and Saves the Princess. Drosselmeyer’s ideas seem inexhaustible. He makes clockwork toys including a clown, a doll and a Moor dance for the children. The Nutcracker, however, is Masha’s favourite.Franz takes the Nutcracker from Masha and the head comes off in his hands. Drosselmeyer quickly mends the Nutcracker. Masha cuddles and comforts her damaged favourite. It is late and the guests must depart. The party comes to an end with some dances. Masha says goodnight to the Nutcracker and the candles on the tree are extinguished. Masha’s nanny takes her to bed.

Act II
Masha goes to bed and falls asleep. She dreams that mice have taken over the drawing room. They are headed by the Mouse King. The Nutcracker leads the tin soldiers in the attack. Masha follows him. Overcoming her fear, she throws her slipper at the Mouse King at a decisive point in the battle, thus saving the Nutcracker. The Mouse King has been defeated and disappears together with his troops. Drosselmeyer turns Masha and the Nutcracker into a beautiful Prince and Princess. They are caught up in a blizzard and their journey to a fairytale land begins.

Epilogue
Masha is asleep in bed. It will soon be morning. Her magical dream is over. Masha awakes.

Composed following the scene plan by Marius Petipa for a fairy-tale ballet féerie, Tchaikovsky's music was first performed in a production staged by Lev Ivanov in 1892. Luxuriously designed, that production answered the spirit of 19th century ballets – the integrity of the subject dramaturgy was not among the choreographer's primary tasks; the ballet master focussed his attention on the wealth of the dance text. "In the music of The Nutcracker there is not a single rhythm, not a single bar that could not flow into dance. On the stage everything seethes in an unceasingly gentle splash of the calmest of figures with explosions of rubicund and merry children's laughter, children's delights, raptures and momentary disappointments," as the critic Volynsky nostalgically recalled of Ivanov's production which was dropped from the repertoire once the country had become Soviet. The avant-garde 1920s granted the Leningrad stage a new reading of Tchaikovsky's music. In the production staged by Fyodor Lopukhov there was no room for the serene harmony of classical dance. Acrobatic lifts, the splits and melodeclamation squeezed out the traditional variations and pas de deux. And yet the plastique experiments and the choreographer's stressing of the tragic basis of Tchaikovsky's score were met with caution by the critics. And already in 1934 the playbill announced a new Nutcracker – a production by Vasily Vainonen, a child of the new age that welcomed political correctness and the grounding of the dance firmly through the development of the fairy-tale plot. "Petipa's scene plan for The Nutcracker did not satisfy me because of the lack of a realistic interpretation of the first act, the intermitent intrigues and the gloss of sugariness (gingerbread houses, mice dressed in little cloaks etc)," wrote the choreographer and, rejecting imaginary characters, he created a production about a girl who dreamed of miracles. In Tchaikovsky's music the choreographer heard the harmony of sweet, caramel-like children's dreams and created a dance plot referring back to the traditions of 19th century ballet – with full classical ensembles in the Waltz of the Snowflakes and the Waltz of the Flowers, the pas de deux of the lead characters and the divertissement of the character dances in the Land of Sweets. Vainonen's Nutcracker was created using the established language of classical dance, the peripeteia of the plot in it are presented through dance and its choreographic variety was to prove a guarantee for its lengthy stage life. The production has not left the stage for over eighty years. Today it is performed both by performers from the Mariinsky Theatre and students of the Vaganova Ballet Academy.
Olga Makarova

The Nutcracker
on the playbill