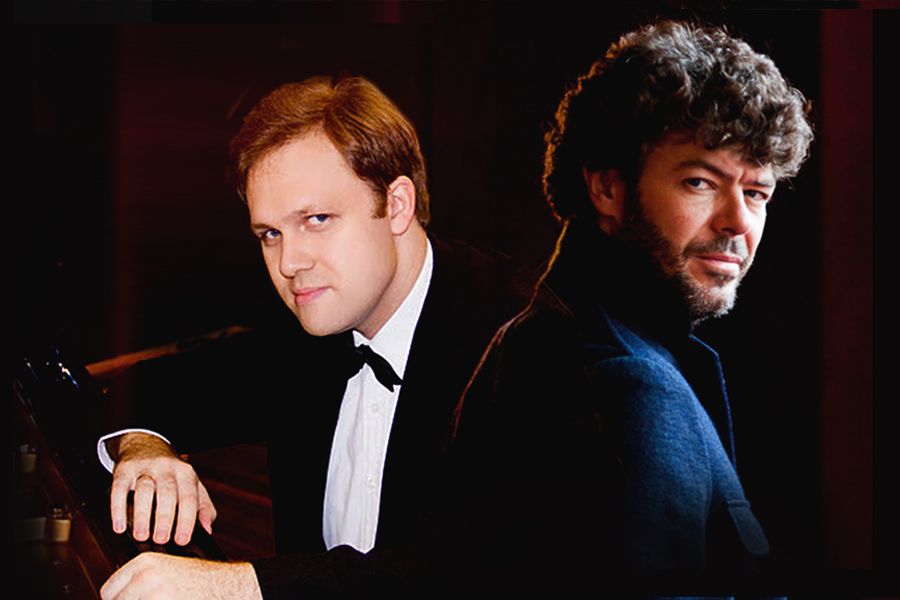 The cello was Dmitry Shostakovich’s favourite instrument (perhaps because it resembles the human voice so closely). Already in his Trio (Op. 8) from his young years, the cello acts, so to speak, “as the first violin.” Just think of the number of cello solos or music for the cello section in Shostakovich’s symphonies, operas and ballets!
“Cello Concerto No 1 was Shostakovich’s first opus for cello written specially for me,” Mstislav Rostropovich recalled, “he was inspired by Prokofiev’s Sinfonia Concertante. He loved that work, he loved it deeply... He was enchanted with its details... Take the finale of the Sinfonia Concertante: the cello, like a circus marionette, soars upwards to the very highest notes. Then the timpani player ends this madness with one strike... And I see that at the end of Shostakovich’s concerto there are seven beats of the timpani!” Shostakovich’s Cello Concerto, inspired by Prokofiev, in turn compelled Benjamin Britten to write his Symphony for Cello and Orchestra.
Cello Concerto No 1 in E Flat Major, Op. 107 (1959) is split into two: after the initial Allegretto the three subsequent movements are performed without interruption. The main theme of the first movement (a brief four-part motto, the work’s leitmotif) is subjected to dynamic development. The secondary theme is executed with truly Russian breadth and power. In the laconic development a major role is played by the French horn – the other solo instrument.
The melodic images of the second movement (Moderato), restrained in the manner of a sarabande, stand out for their remarkable songful qualities; their initially veiled grief leads to the tense culmination. The third movement (Cadenza. Moderato. Allegro non troppo) – a passionate cello monologue, a traditional cadenza in which the soloist demonstrates his or her virtuoso skills. The finale (Allegro con moto non troppo) in the form of a rondo concludes the cycle with a decisive coda in which the motto-motif from the first movement is repeated.
The first performance of the concerto took place on 4 October 1959 in Leningrad. The orchestra of the Leningrad Philharmonic was conducted by Yevgeny Mravinsky with Mstislav Rostropovich performing the solo. The French horn was performed by Vitaly Buyanovsky.
Iosif Raiskin

Sergey Rakhmaninoff's 3rd Piano Concerto was written at a time when his talent had finally been freed of doubts, self-restrictions and external obstacles, had fully matured and strengthened. Starting with the 2nd Piano Concerto in 1901, brilliant new compositions, frequently more than one, appeared every year. This phenomenal burst of creativity was not impeded even by Rakhmaninoff's intensive performing and conducting commitments. The 3rd Piano Concerto was written in the summer of 1909, when the composer was 36 years old. In the music of Concerto one can distinctly hear not only the maturity of a Master, but also a new scope, breadth, freedom...
The concerto was first performed in New York on 28 and 30 November 1909 during Rakhmaninov's American tour. The Russian premiere, performed by the composer, took place in Moscow on 4 April 1910. The concerto is dedicated to the outstanding Polish pianist Jozef Hofmann, whom Rakhmaninoff met during a tour of Russia (their acquaintance subsequently continued in the USA). Hofmann expressed his feelings for the composer most vividly in this heartfelt epitaph:
Rachmaninov was made of steel and gold:
Steel in his hands, gold in his heart.
I cannot think about him without tears.
I not only admired him as a great artist,
But loved him as a man.
The 3rd Piano Concerto is one of the composer's most "Russian" works. It is often called a "concerto-song" or a "poem about the Motherland". The musical narrative – dramatic, with tragic episodes – is always lyrically painted, and can be likened to a "struggle between light and shade". The "conquest of the world" in the Finale is a genuine hymn of joy that found a particular resonance in the atmosphere of Russia at the end of the first decade of the 20th century. The middle movement, the Intermezzo, is an enigma and, to a large extent, a portent of the future (not only the "denouement" of the Concerto, but also the composer's later works) – a very personal expression, music which is, in a fantastic way, an interweaving of the present and memories of the past.
Vladimir Goryachikh

The Seventh Symphony opens the triad of Antonín Dvořák’s last symphonies. Although this work does not enjoy the popularity of the subsequent Eighth and Ninth Symphonies it is undoubtedly one of the greatest achievements of Czech and European classical music.
In the summer of 1884 Dvořák was elected as an honorary member of the London Philharmonic Society. To mark the occasion he was offered the chance to conduct his new symphony in London. By that time the British capital had already seen successful performances of the composer’s Sixth Symphony and his oratorio Stabat Mater. It comes as no surprise that Dvořák accepted the invitation eagerly: for him it represented a brilliant opportunity to declare himself a European and not just a Czech composer.
The Seventh Symphony is justifiably considered the most dramatic of all of Dvořák’s symphonies. The whole character of the work is set by the tense main theme of the first movement, which introduces low strings against a restrained general tone. The lyrical secondary theme can be heard in the woodwinds and brings partial tranquillity. In the development the dramatic conflict unfolds, and at the end of the movement the tension dies out. The second movement begins as a lighter chorale, though here, too, there are perturbed motifs. In the third movement Dvořák turns to the rhythmic forms of Bohemian folk dance – the furiant. The finale is dominated by unsteady and anxious intonations and it is only in the final bars that the major key comes in – though this does not actually relieve the tension.
Vladimir Khavrov