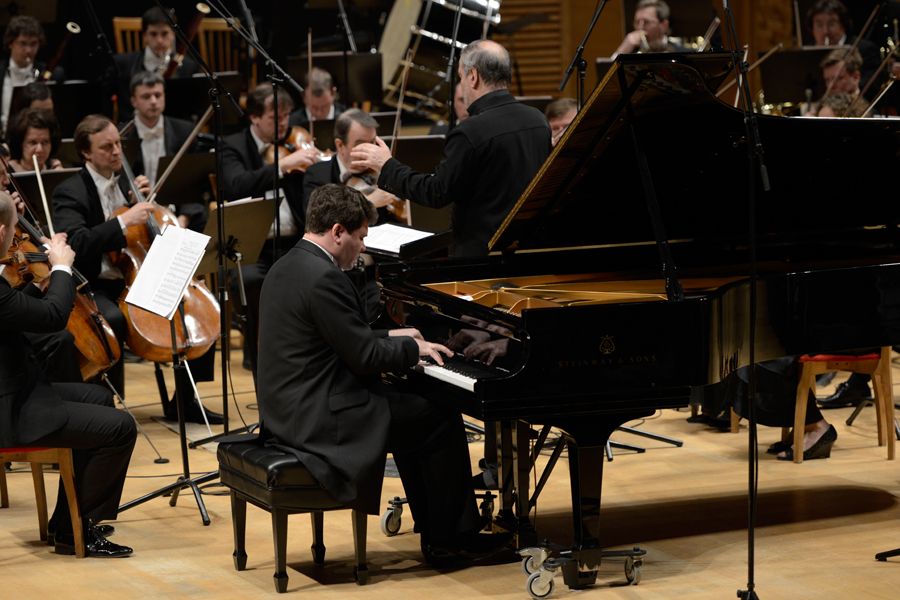 Suite from the ballet The Firebird (1919)
One week before the curtain came up at the Opéra de Paris on 25 June 1910 Igor Stravinsky turned twenty-eight years of age. In Russia, his native land, the young composer was already well-known in musical circles as a highly-talented pupil of Nikolai Rimsky-Korsakov. But it was there, at the Paris premiere of The Firebird, that Stravinsky’s powerful voice resonated at full volume for the first time.
Created in close collaboration with other outstanding artists – the choreographer Michel Fokine and the designer Alexander Golovin – and dazzling ballet dancers (with Tamara Karsavina in the lead role), The Firebird, in the words of one Parisian critic, was a “wonder of enchanting balance between the movements, sounds and forms.” However much might have been said of the influence of Rimsky-Korsakov and Debussy, here the young composer discovered his vivid and primordial gift. “In this tale Stravinsky truly caught the feather of gold and light, and the entire score of the ballet began to sparkle with a rainbow-like glow and the fiery glow of precious stone-timbres,” wrote the academician Boris Asafiev many years later.
Soon after the premiere of the ballet Stravinsky produced the orchestral suite from The Firebird (1911), inspired not just by the success of the music but his interest in its purer performance on the concert platform. In The Chronicle of My Life the composer wrote “I, as the composer of many works for the theatre, have seen with sadness that the true purity of a performance is only possibly on the concert stage, while in theatre, where all manner of elements combine together, the music often becomes dependent on other elements...” The composer subsequently returned to the score of The Firebird on two occasions. In 1919 there emerged the suite in which Stravinsky rejected a full orchestra. Instead of “decoratively beautiful Byzantine extravagance” (Boris Asafiev) there came a more “economic” and yet mature orchestral embodiment, typical of the composer’s instrumental style that had already been established by that time. A quarter of a century later, in 1945, Stravinsky composed his third version of the suite.

Igor Stravinsky. Capriccio for Piano and Orchestra “In the concerti I have composed I have retained the old traditions of the genre,” Stravinsky informed the readers of a Parisian magazine in 1935, “I have contrasted the leading instrument of the concerto with the orchestral ensemble or several other instruments that are also concerto instruments. In this way the principle of competition is maintained.”
This principle is most vividly embodied in the Capriccio for Piano and Orchestra (1929). But Stravinsky, already on the path of neo-classicism (of which he was a pioneer in the late 1920s), always remained true to his favourite motto: con tempo – together with time. “Modern music,” he said “is the most interesting of any music ever written and the current moment is the most exciting in the history of music. It has always been that way.” Neither is the title of the work a chance circumstance – capriccio: a whimsical and “capricious” combination of baroque concert performance and ragtime with its syncopated rhythm makes the first movement of this laconic piano concerto stand apart. The second movement is an unhurried instrumental aria with lively episodic scenes shaded by a slower movement. With his patterns the soloist “embroiders” the orchestral fabric. The finale is a kind of toccata, a not-too-fast perpetuum mobile; in the merry and rhythmic “springy” music the major key is triumphant and the joy of life is unclouded.

Rodion Shchedrin. Piano Concerto No 2
Rodion Shchedrin made his debut as a composer with Piano Concerto No 1 in which he literally took on the baton from the first concerti for the favourite instrument of his then and, arguably, unfading heroes – Sergei Prokofiev and Dmitry Shostakovich. The virtuoso dazzle of the solo part, the expressive and varied structure of the piano score, the devil-may-care tempo, the astringent harmonious language – in everything there is a non-aggressive but well-heard “Russian-ness”, the apogee of which is a limerick – the very same reckless “Semyonovna”, who was previously turned away from the doors of polite society. It was almost 1954 – the “Thaw” was coming and the conservative pedants were grumbling about “formalist recidivists”... The composer and pianist’s talent won them over. Following the dazzling performance by the composer he received a letter informing the conservatoire graduate that he had been admitted into the Union of Composers without even having applied to do so.
It was only twelve years later in 1966 that Shchedrin again returned to this genre. And again he literally tore musical society apart – Concerto No 2 was met with frenzied discussion, this time at the Plenum of the Union of Composers of the USSR at which there arose the serious matter of the ideological intentions of his composition technique. Dodecaphony (a method of composing music using twelve independent tones) was then considered, funny though it may be to say, “bourgeois”; neither was jazz approved of by the USSR’s cultural ideologists, despite its popularity with the general populace. But Shchedrin boldly made a collage of these two seemingly polar styles. The names of the concerto’s movements are in themselves quite typical – Dialogues, Improvisations and Contrasts. The basis of the first movement is a dodecaphonic series, a piano recitative that resembles an epigraph. In the development we have a chain of tense dialogues between the soloist and the orchestra. In the Improvisation Shchedrin was one of the first in Soviet music to use aleatoricism – a technique that “legalised” the principle of chance in composition, making the performer not an intermediary but a co-creator with the composer. The virtuoso scherzo is a kind of toccata, both themes of which are performed by the trumpet and the piano. Both the soloist and the orchestra improvise with increasing freedom. It is only at the end of the scherzo that the impetuous movement becomes distilled and is placed in a strict framework defined by the composer. The third movement Contrasts opens with chime-like chords of the orchestra that resemble a bell ringing out. In response the pianist freely performs preludes, his fingers running across the keyboard as if trying out the instrument. The repeated “chime of the clock” is succeeded by an early air performed by the strings, which is unexpectedly followed by the solo piano with a pizzicato of the double-bass and snare drum (we can hear melodies of the Modern Jazz Quartetin Shchedrin’s free interpretation). “In the Concerto I wanted to convey the sharp meeting of different music styles,” the composer later wrote, foreseeing the aesthetics of postmodernism so prevalent today.
Iosif Raiskin