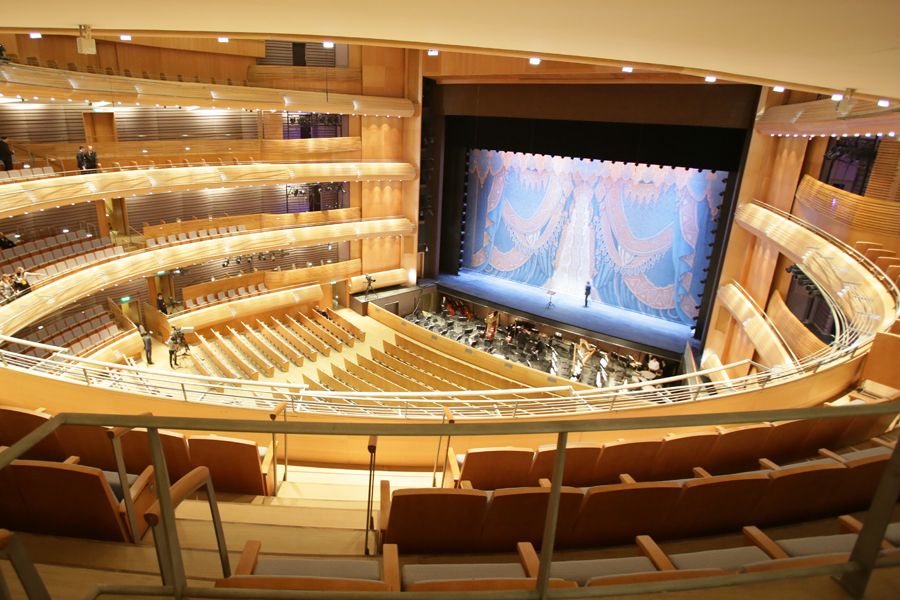 Act I
The evening atmosphere at the Santa Lucia quay in Naples is buzzing and there is a festive feeling among the crowd while they await the return of the local fishermen. Veronica, a widow, lives in a house by the square with her beautiful and much sought-after daughter, Teresina. Though courted by two suitors – Giacomo, the macaroni seller, and Peppo, the lemonade seller – Teresina shows no interest in them. She is longing for her sweetheart, Gennaro, a poor fisherman who is out fishing.
Upon his return with the catch of the day, Gennaro wishes to share it with a poor pilgrim passing by, but unselfishly, she declines his kind offer. Teresina offers her a piece of jewellery, a small silver heart, but instead, the wanderer suggests her to put it around Gennaro’s neck. In the face of their generosity, the pilgrim blesses the young couple.
An innocent flirt between Gennaro and Giovanina, Teresina’s friend, causes Teresina’s immediate jealousy, but when Gennaro offers her a gold ring, the quarrel is soon forgotten. Veronica chases Teresina home, but Teresina slips away to play the guitar with Gennaro. Peppo and Giacomo are miserable at the sight of the young lovers.
They try to turn the feelings of the crowd against them, only to end up being the cause of ridicule themselves. Teresina and Gennaro dance together. Teresina who wants to be alone with Gennaro is pressing him to take her out to sea in his boat. Gennaro hesitates: he is aware of a storm coming on, but Teresina insists and eventually, he gives in to her wishes.
They have hardly left the harbour when a heavy storm capsizes the boat. Gennaro makes his way ashore, but Teresina is nowhere to be found. Senseless in his despair, Gennaro tells everyone that Teresina has perished during the storm. In her mourning, Veronica puts a curse on him. Gennaro is rejected by everyone but the poor pilgrim who is passing by. She remembers the young couple and their generosity. While she reminds Gennaro of the silver heart around his neck, she urges him back to the Gulf to rescue his beloved Teresina.


Act II
The storm has taken Teresina to the Blue Grotto. Slowly, she sinks to the bottom, down to the kingdom of the sea spirit, Golfo. His curiosity is stirred by her beauty and she awakes surrounded by Naiads. In a ritual dance, Teresina is transformed into a Naiad while loosing all memory of her past. Golfo is about to seal her fate with the kiss of death when Gennaro reaches the grotto in search for Teresina and discovers her guitar.
Diving to the bottom of the grotto, he finds her among the Naiads only to realise that she no longer remembers him. In an attempt to restore her memory, he shows her the silver heart and they are joined together in a dance of love. Though Golfo tries to destroy Gennaro, the young fisherman’s love is so strong that even death must obey Gennaro’s will. Golfo slowly retreats at the sound of Gennaro’s love serenade and Teresina comes to her senses and chooses love and life.

Act III
Gathered at the foot of Monte Virgine outside Naples, the townsfolk mourn the loss of the drowned Teresina. Veronica is sobbing and the people are in despair. Much to their surprise, Teresina and Gennaro turn up and everyone marvel at the miracle: Teresina is alive!
Veronica gives in to their love and they are married by the priest. The people rejoice at the festive wedding celebration and the young people of the town show a series of dances in honour of the four seasons and the cycle of life. It all culminates in the Tarantella folk dance and a sparkling finale.