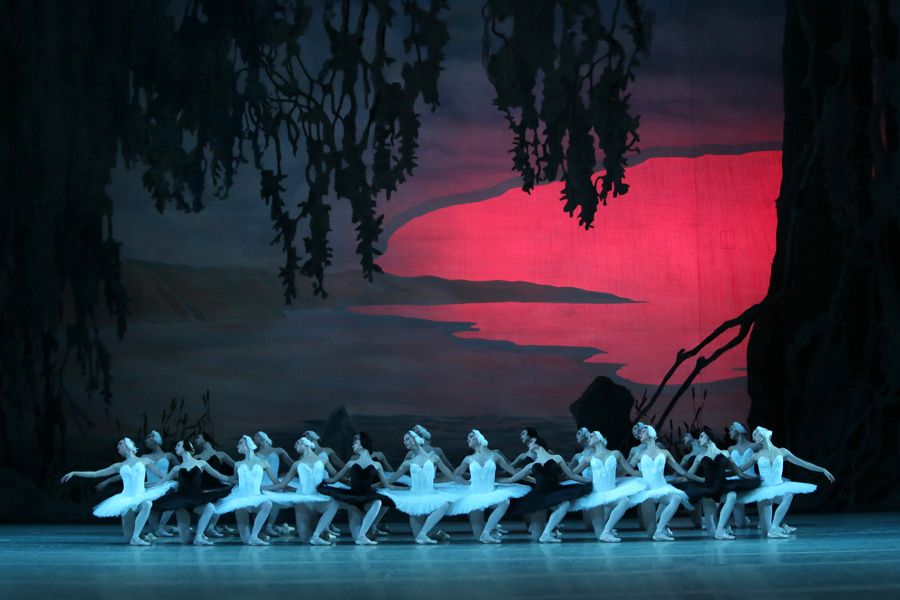 Lighting Adaptation for the Mariinsky II by Yegor Kartashov

ACT I
Scene 1
Prince Siegfried and his friends are celebrating his coming of age at a private party. The guests drink to his health and the jester entertains them with his antics.
The Prince is warned that his mother, the Princess Regent, is approaching. She is displeased with her son´s behaviour and he presents her with a bouquet of roses to pacify her. After the Princess has gone, the partying begins anew.
Twilight falls. The guests depart and the Prince is left alone in the park. High above, Siegfried catches sight of a flock of white swans and the sight stirs the hunter´s urge in him. Seizing his bow, the Prince makes his way off into the heart of the forest.

Scene 2
A Lake in the Forest in the Middle of the Night. White swans are swimming near the shore; they are beautiful young maidens who have been transformed by the evil magician Rothbart. Only at night can they assume human form and the only power on earth which can break this evil spell is devoted love. Siegfried appears. He sees one of the white birds come to shore and draws his bow to shoot it. The bird suddenly turns into a beautiful woman – it is Odette, Queen of the swan-maidens. Odette´s beauty enthrals the Prince and he tries to capture her. She, however, is afraid of the evil magician and, as she avoids Siegfried, she disappears in the midst of the swan-maidens.
Siegfried runs after Odette and vows eternal love and fidelity to her. Odette´s heart responds in the same way to Siegfried´s passionate love. Dawn breaks. Odette bids Siegfried a tender farewell and the white swans glide slowly away across the lake.

ACT II
Scene 3
A Ball at the Castle. Siegfried must choose a bride from among the well-bred maidens who have been invited, but he remains indifferent to them all because he has given his heart to Odette. Only at his mother´s insistence does he dance with any of the prospective brides.
He must, however, choose one of them, and as a token of his love, he must give his chosen bride a bouquet. As he faces this dilemma, however, a fanfare of trumpets heralds the arrival of new guests: the magician Rothbart and Odile, his daughter. The Prince is struck by her resemblance to Odette. Rothbart wants the Prince to fall in love with Odile so that he will break his vow of eternal love and fidelity; Odette will then remain in the sorcerer´s power forever. It is for this reason that he has given his own daughter Odette's form and features. Odile seduces Siegfried, who is fascinated by her charm. He announces to his mother that the beautiful Odile is his choice. The wicked magician is jubilant.
Suddenly Siegfried sees a vision of the true swan-maiden outside the castle window and realises that he has been deceived into breaking his vow. In despair, he rushes to the lake to find his beloved Odette.


ACT III
Scene 4
The Lakeside, at Night. The swan-maidens stand dejected and sad. Odette has told them what has happened. Siegfried rushes in. He begs Odette to forgive him and he professes his undying love for her, but the enraged sorcerer summons the black swans and commands them to separate Odette and Siegfried.
Siegfried grapples with the magician. Fearless in the encounter, he breaks Rothbart´s wing. The enchanter collapses, his power gone, and he dies.
Love has broken the evil spell. The sun rises and shines radiantly on the Prince and Odette, and on the maidens whom Siegfried has rescued.