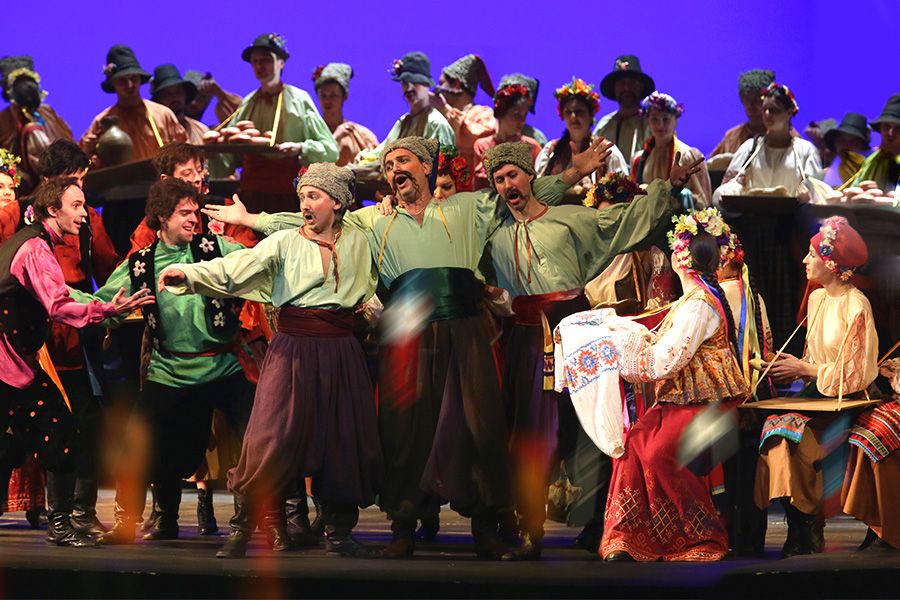 Music by Modest Musorgsky
Libretto by the composer with the participation of A.A. Golenithsev-Kutusov after the tale of the same name by N.V. Gogol

Act I
A hot summer’s day. A noisy market is underway. Cherevik has come here to sell wheat and a mare. His daughter, the beautiful Parasya, is with him. Intending to scare the buyers and get the goods he needs cheaper, the Gypsy tells the crowd that not far off, a Red Coven has settled in an old barn; it belongs to the Devil and brings destruction on people. In the meantime, the peasant lad Gritsko is murmuring sweet nothings to Parasya, whose beauty has captured his heart. Cherevik is initially incensed at the lad’s bold amorousness, but on discovering that
Gritsko is the son of his old friend he has nothing against the marriage. Now it is time to go into the tavern. Cherevik emerges to go home late together with Kum. Khivrya meets her husband in fury. There is no end to her wrath when she discovers that the bridegroom is none other than the very same peasant lad who recently made fun of her. Hearing this talk, Gritsko is deeply saddened. However, the Gypsy declares he will help on the condition that the lad will sell him his oxen cheaply.

Act II
Khivrya has thrown her husband out of the house for the night under some specious excuse, and is eagerly awaiting her lover Afanasy Ivanovich. At last, the priest’s son appears, generously showering her with high-flown compliments. Tirelessly Khivrya entertains her guest. But the priest’s son’s declarations of love are interrupted by a knock at the gate – it is Cherevik and Kum with some guests. Shaking in fear, Khivrya’s lover hides on the sleeping bench. The unexpected arrivals are scared to death by the Red Coven, which rumour has it came to the fair. Only once having drunk some liquor do they calm down somewhat. Kum leads a talk about the Devil, who has pawned the inn-keeper his Red Coven, and now, disguised as a pig, is searching for it all over the fair. The sudden appearance of a pig’s snout at the window throws everyone into indescribable terror. The guests and master and mistress flee to safety.

Act III
Headed by the Gypsy, the peasant lads seize Cherevik and Kum and tie them up, ostensibly for stealing the mare. In line with the Gypsy’s cunning plan, Gritsko appears in the role of their rescuer. As a reward, the lad demands the wedding take place immediately, and Cherevik agrees gladly enough. Dreaming of Parasya, the happy bridegroom falls asleep. He dreams Chernobog and his retinue are celebrating the Witches’ Sabbath that ceases only with the peal of the church bell.
Parasya misses her beloved. And so the lovers’ meeting is even more joyous. Taking advantage of Khivrya’s absence, Cherevik blesses the young couple. All dance a hopak in joy.


“How intoxicating, how magnificent is a summer day in Little Russia!” begins Gogol’s Sorochintsy Fair, with several masterstrokes further depicting a truly enchanting scene of Ukrainian nature “on a hot day in August.” On just such a day in August 1879 Musorgsky – arriving in Ukraine for the first time (he was accompanying the singer Daria Leonova as an accompanist and pianist on a concert tour) – wrote to his friends in admiration: “But if you saw the vast expanses of the Ukrainian steppes, if you saw the twinkling sky, all adorned with stars, through the air all light and at the same time dark as a sapphire, if you breathed the southern Russian air that almost draws one’s lungs and heart out of one’s chest, so gentle that one wants to live and live forever and ever!” Musorgsky was proud that the music of  Sorochintsy Fair (1874–1881) which he composed at that time was close to and understood by Ukrainians, that it was acclaimed as “truly of the people” and “was highly approved of everywhere.” The composer heard and took down Ukrainian folk songs, learned the particular nature of the Ukrainian dialect and its creative depiction in Gogol’s prose. But Musorgsky saw his opera not just as a complex artistic task; it is believed that composing it brought its creator spiritual repose and joy. Sorochintsy Fair is Musorgsky’s lightest and most poetic work, filled with humour and warm lyricism. The composer called his opera “comical” and this is indeed the case: everything presented in it (the trading at the market, the love intrigues of Parasya and Khivrya, the “terrifying” fantastical scenes of the witches’ Sabbath in the Lad’s dream-like vision, not to mention the scene of Popovich and Khivrya) is bathed in Gogol and Musorgsky’s gentle humour. I use the word “presented” deliberately: in the manuscript score, the composer added the jokey note to the role of the Gypsy “director of comedy”. The varied scenes that unfold in the opera to a great extent take place because of the Gypsy and his presence as a “stage director” so that he can subsequently tell the tale as well as the tale of Krasnaya Svitka.
Sorochintsy Fair remained uncompleted; as with two other operas by Musorgsky – Salammbô and Khovanshchina – not everything he composed has survived to the present day (for example, two – according to Vladimir Stasov – “brilliant” gypsy choruses). Of all the versions created by other composers, that with the greatest stage life has been that of Vissarion Shebalin, who completed and orchestrated the opera in 1931–1932. It is this version that is currently performed at the Mariinsky Theatre.
Vladimir Goryachikh