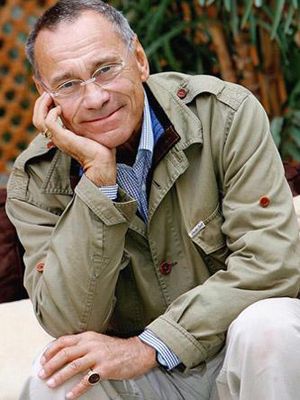 Renowned cinema director, script writer and theatre figure.
Studied at a music school and subsequently at the Moscow Conservatoire (piano class). At the age of twenty-two he entered the All-Russian State Institute of Cinema, workshop of Mikhail Romm. For one of his diploma works he made the film The Boy and the Dove (awarded the Bronze Lion prize at a festival of children’s films in Venice, 1961). Konchalovsky’s degree work The First Teacher after the story by Chingiz Aimatov took several prizes and awards, including the special jury prize at the young cinematographers’ film festival in Iero and the Volpi Cups for Natalia Arinbasarova who performed the lead role in Venice in 1966 among others.
Together with Andrei Tarkovsky, he wrote the scripts for the films The Skating Rink and the Violin, Ivan’s Childhood and Andrei Rublyov. Also wrote the scripts for Lyuty, Tashkent – City of Bread, The Seventh Bullet, The Fan, We’re Waiting for You, Boy and Tran Siberian Express. In 1972 he was awarded the State Prize of the Kazakh SSR for the script of The End of the Ataman.
In 1980 he was made a People’s Artist of the Russian Federation. The same year he began working in Hollywood (USA).

As a theatre director, he has staged The Seagull at the Odéon (Paris) and the operas Eugene Onegin and The Queen of Spades at La Scala (Milan) and the Opéra Bastille (Paris).
He was invited to be the production director of the musical pageant Our Ancient Capital, which opened celebrations marking eight hundred and fifty years since the foundation of Moscow.
In 1997 he was awarded the order For Services to the Fatherland.
In 2003 he staged a celebratory show in St Petersburg on the balustrade of the reconstructed Konstantinovsky Palace to mark the city’s tercentenary. The same year he completed the montage of a screed version of Goldman’s The Lion in Winter.

For more information, please go to the www.konchalovsky.ru