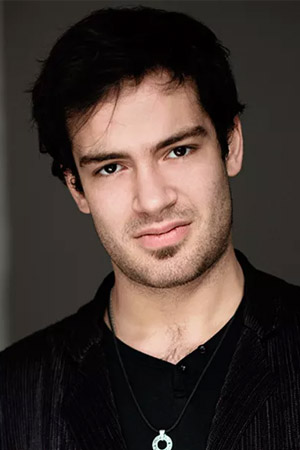 Curious, inventive, mischievous and drunk with freedom […] an incredible ability to defy the laws of gravity.

Marc Bouchkov was born in 1991 in Montpellier, France, into a family of violinists. He received his first lessons at the age of five from his grandfather, Matthis Vaitsner. He studied with Claire Bernard and Boris Garlitzky, who has been his mentor ever since.

From October 2014 to July 2017 Marc Bouchkov studied in a postgraduate course at the Kronberg Academy with Mihaela Martin, where since his graduation he works as an Artistic Assistant. Since 2018 Marc Bouchkov has been guided by professor Eduard Wulfson, with whom he prepared for the International Tchaikovsky Competition. Bouchkov teaches as professor for violin at the Conservatoire royal de Liège.

Bouchkov has collaborated with distinguished conductors such as Andrey Boreyko, Christoph Eschenbach, Howard Griffiths, Stanislav Kochanovsky, as well as orchestras such as the Frankfurt Radio Symphony, the Orchestre National de Belgique, the Orchestra Sinfonica Nazionale RAI in Turin, the NDR-Sinfonieorchester Hamburg, the Stavanger Symphony Orchestra, the Royal Philharmonic Orchestra of Liège and the Moscow Philharmonic Orchestra. In 2014 upon the invitation of Mariss Jansons, Bouchkov performed the inaugural concert of the Royal Concertgebouw Orchestra’s Essentials series.

As a keen chamber musician, Marc Bouchkov collaborates with artists such as Alexey Stadler, Georgy Dubko, Behzod Abduraimov, Christopher Park and Kian Soltani. He is a frequent guest at international festivals including the Verbier- and Davos festival and the Heidelberger Frühling and has performed across many reputable concert halls such as the Theatre de la Ville in Paris, the Konzerthaus Berlin and the Elbphilharmonie Hamburg. In October 2016 he gave his debut at Wigmore Hall London where he was awarded with the London Music Masters award.

In the fall of 2017 the first album of Marc Bouchkov was released with works by Ysaÿe, Chausson and himself. The album was produced as part of the new harmonia#nova series by harmonia mundi and was awarded a Diapason découverte and nominated for the International Classical Music Award 2018.

Highlights of the season 2019–20 include performances with the Mariinsky Theatre under Valery Gergiev, for the very first time a collaboration with the Hamburg Ballet – John Neumeier (Bernstein Serenade), the recording of the Mendelssohn’s Double Concerto under the baton of Howard Griffiths with Claire Huangci and the Basel Chamber Orchestra, as well as recitals and chamber music in Zurich, Bonn and the Schubertiade in Hohenems.
Information for January 2020