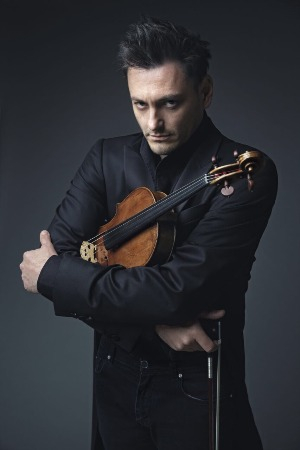 Maxim Rysanov was born in Kramatorsk (Donetsk Region). Graduated from the Central School of Music of the Tchaikovsky Moscow State Conservatory (class of Maria Sitkovskaya) and the Guildhall School of Music and Drama in London (viola class of John Glickman and conducting class of Alan Hazeldine). Has attended conducting masterclasses given by Gennady Rozhdestvensky, Oleg Caetani and Jorma Panula.

Has appeared at the BBC Proms festival, the Mostly Mozart and Crescendo festivals, festivals in Verbier, Salzburg, Edinburgh, Berlin, Istanbul, Hong Kong and Beijing, as well as at the Sofia Gubaidulina International Festival of Contemporary Music Concordia in Kazan and at the Trans-Siberian Art Festival. Recipient of the Classic FM Gramophone Award in the category “Young Artist of the Year” (2008) and the BBC Radio 3 New Generation Award (2007–2009), prize-winner at several prestigious music competitions including the Premio Valentino Bucchi competition in Rome (1995; 1st prize), the Lionel Tertis International Viola Competition in Port Erin (Isle of Man, 2003; 2nd prize) and the Geneva International Music Competition (2005; 2nd prize).

On more than one occasion, Maxim Rysanov’s recordings have been awarded the ICMA award for classical music, the ECHO KLASSIK prize, awards and nominations in Gramophone magazine in “Editor’s Choice” as well as heading iTunes ratings in the USA. in 2014 for an album of works by Dobrinka Tabakova (String Paths, ECM, 2013) Rysanov was nominated for a GRAMMY award as violist and conductor. in 2017 Onyx released a double disc with music by Schubert and composers he inspired; Maxim’s work as a conductor and as a musician proved to be “Critics’ Choice of the Year” in Gramophone magazine. 2020 saw the release of an album of music by Pēteris Vasks (Viola Concerto and Symphony No.  1 Voices, together with the Sinfonietta Rīga orchestra).

He performs on a Giuseppe Guadagnini viola crafted in 1780, on generous loan from the Premiere Performances of Hong Kong.
Information for July 2021