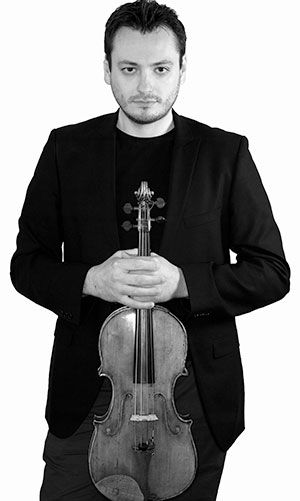 Maxim Rysanov is principally known for his performances as a violist, guest of the crème of international music scene such as BBC Proms (including the Last Night), Verbier Festival, Mostly Mozart Festival, Edinburgh Festival, Salzburg Festival, Bejing Festival, Istanbul Festival, Berlin Festival and Crescendo Festival among others. He now combines his viola performance with a career as a conductor.

He has long been recognised by the international music scene and his list of prizes affirm that status. These include the Classic FM Gramophone Young Artist of the Year Award and the BBC Radio 3 New Generation Award, as well as the Geneva, Lionel Tertis and Valentino Bucchi international viola competitions.

In the season 2015-2016 Maxim Rysanov is making his conducting debut with the Russian National Orchestra, Spanish Radio Orchestra, La Verdi Orchestra Milan, London Mozart Players as well as returning to conduct the Lithuanian Chamber Orchestra and Riga Sinfonietta. As a concerto soloist Maxim Rysanov will perform the world premiere of a new Viola Concerto by Peteris Vasks in May 2016. The work is being co-commissioned for him by the BBC National Orchestra of Wales, the Vale of Glamorgan Festival and the Orchestre Philharmonique de Strasbourg.

Originally from Ukraine, Maxim Rysanov has made London his home. He studied viola with Maria Sitkovskaya in Moscow and John Glickman in London at the Guildhall School of Music and Drama. He studied conducting with Alan Hazeldine at the Guildhall School of Music in London, and has taken part in several masterclasses including with Gennady Rozhdestvensky and Jorma Panula.

Maxim Rysanov is currently Artist in Residence at the Royal College of Music. He is delighted to have a Giuseppe Guadagnini viola (1780) on extended loan from the Elise Mathilde Foundation.