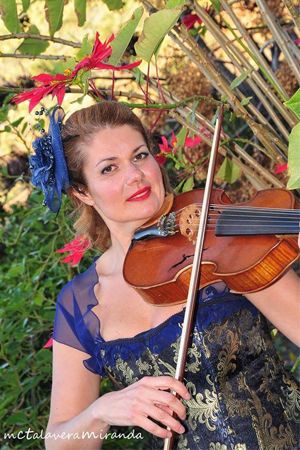 Born in 1969. Graduated from the Moscow Gnessin Middle Special School of Music and in 1992 she graduated from the State Gnessin Musical Pedagogical Institute (today the Russian Academy of Music), class of senior lecturer Igor Boguslavsky. As a student she won 2nd prize at the All-Union Competition of Performing Musicians in Lvov and a diploma at a prestigious international competition in Geneva.

The musician's repertoire includes every work for classical viola as well as music for the viola d'amore. Irina Ivanova has given recitals at venues in Spain, South Africa and Russia, recorded on Johannesburg Radio (sonatas by Schubert, Brahms and Shostakovich and various works by Schumann) and released four CDs featuring solo and ensemble repertoire for viola and viola d'amore, including sinfonia concertantes by Mozart and Dittersdorf among other pieces.

Since 2014 she has been a deputy concert mistress of the viola section of the Mariinsky Orchestra. Performs viola solo roles in the ballets Giselle, The Fountain of Bakhchisarai and The Firebird and the opera Th Snow Maiden as well as the viola d'amore solo in the ballet Romeo and Juliet. Irina Ivanova's solo performances take place at the Concert Hall and the theatre's chamber venues.