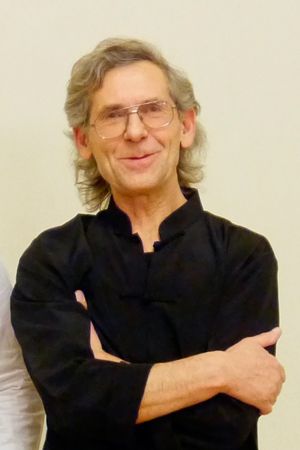 Vyacheslav Gaivoronsky is a composer, trumpeter and music theorist.
In 1970 he graduated from the Leningrad State Rimsky-Korsakov Conservatoire in trumpet studies. There he also studied composition under Orest Yevlakhov and Boris Tishchenko.
Vyacheslav Gaivoronsky’s music combines the traditions of classical music, free jazz, aleatoricism, bebop, Indian rag and folklore from various countries. Works include symphonic poems, an opera, a musical and symphonic versions of songs by Boris Grebenshchikov. Tours in a trio with Vladimir Volkov and Andrei Kondakov and performs concerts with violinist Vladislav Pesin and violist Dmitry Yakubovsky.
Also works as a teacher. His students include the double-bass player Vladimir Volkov and the composer Alexander Manotskov. Created a system of harmonies that combines the universal qualities of different music traditions, describing it in the book At the Church Gates.
The director Vladimir Nepevny made a film Gayvoronsky: Moments about the musician, presenting his anniversary concerts in 2017 and rehearsals for them.
Information for December 2018