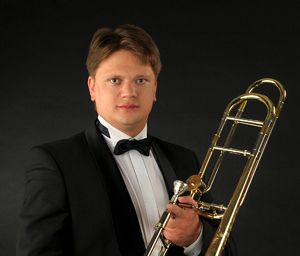 Alexander Gorbunov has performed with leading Russian and international ensembles including the symphony orchestras of the St Petersburg Capella, the Mariinsky Theatre and the Zurich Opera. He is currently the leader of the trombone section in the National Philharmonic Orchestra of Russia with which he has worked since its foundation in 2003.

To perfect his performing skills, Alexander Gorbunov takes part in master-classes, appearing with various ensembles with chamber music programmes and enlarging his repertoire with pieces written by contemporary composers, world premieres and premieres with the National Philharmonic Orchestra in Moscow.

Alexander Gorbunov is not only a brilliant orchestral artist and frequent performer with various brass ensembles, but also a talented concert trombonist. He has given recitals in Russia, Lithuania, Ukraine, Austria, Germany and Finland, released two discs of chamber music and the superlative level of her performing skills has been praised by the juries of international competitions on several occasions: he has won first prizes at international competitions in Markneukirchen (Germany, 2002) and Budapest (Hungary, 2005) and grand prix at competitions in St Petersburg (2008) and Moscow (2009).