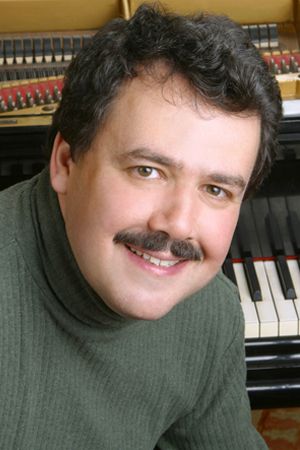 “Particularly striking was the sound: big without brutality, rich but always clear in focus.”


“His ability to execute the details while at the same time clothing the music in broad colors and expansive melodic gesture recalled a manner of Chopin playing from past generations.”


“Yanovitsky will become one of the great piano talents of our time.”


“Rarely does one leave a concert hall in such an elated mood as provokes the performance of Mikhail Yanovitsky... he is a true master.”

Mikhail Yanovitsky was born in Leningrad (now St Petersburg), where he began to study piano under the guidance of his mother. He graduated from the Leningrad Special School of Music (class of Marina Wolf) and then from the Moscow Tchaikovsky Conservatoire, where he studied under Mikhail Voskresensky. Yanovitsky continued to develop his piano career in the 1980s, making his debuts with the Leningrad Chamber Orchestra, the Moscow Philharmonic and the Leningrad Philharmonic.
Yanovitsky relocated to the USA and, in 1991, won the Young Concert Artists Auditions, becoming their most frequently re-engaged artist. Still represented by Young Concert Artists, he played for the New York Chamber Orchestra under the baton of Gerald Schwartz, the San Francisco Symphony Orchestra under Michael Tilson Thomas and several other orchestras in the USA, Europe, Asia, South Africa and South America.
Yanovitsky has performed in thirty-four American states, including appearances at the Isabella Stewart Gardner Museum (Boston), the Carnegie Recital Hall (New York), the Convention Center (Philadelphia), the Louise M. Davies Symphony Hall (San Francisco), the Chicago Cultural Center and the Kennedy Center (Washington). Mikhail has also performed in fifteen countries throughout Europe as well as in Mexico, South Africa, Uruguay, Australia, Israel, Japan, South Korea and China.
Winning the Gina Bachauer Piano Graduate Scholarship in 1991 and 1992 allowed Yanovitsky to study under Seymour Lipkin at the Juilliard School (New York). In 2002, he completed his Doctorate at Temple University in Philadelphia under the tutelage of Harvey Wedeen and defended his dissertation on Scriabin’s piano music. Several years later, the dissertation was translated into Chinese and published by a Shanghai music publisher under the title Early Piano Miniatures by Scriabin.
Mikhail Yanovitsky has won numerous awards. He was awarded 1st prize at the Concerto Competition (Cantu, Italy) in 1998 and subsequently appeared at the Sala Verdi (Milan). In 1996, he was a prize-winner at the International Piano Competition (Sydney, Australia). He won the Pro Piano competition (New York) in 1994 and the East Hampton Competition in 1992. Since 1994 Mikhail Yanovitsky has regularly performed in Russia, including at the St Petersburg Philharmonic Halls, the Rachmaninoff and Small Halls of the Moscow Conservatoire, the Scriabin Museum in Moscow, the House of Architects and the Concert Hall of the Mariinsky Theatre in St Petersburg.
In 2001, Steinway&Sons named Yanovitsky a “Steinway Artist”. Dr Yanovitsky taught at the Northeastern Illinois University in Chicago before moving to his current position at Temple University. His students have been prize-winners at national and international piano competitions. Critics around the world have praised Mikhail Yanovitsky as one of today’s leading artists.