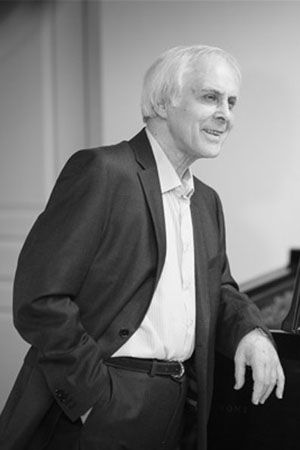 Born in 1939 in Moscow. Studied at several of the Gnessin music educational institutions, where he completed his education. Studied under Sofia Devenishskaya, Moisei Feigin and Teodor Gutman.

Tropp’s students include numerous concert pianists and winners at prestigious international competitions (among them Konstantin Lifschitz, Yulianna Avdeeva, Konstantin Shamray, Mikhail Mordvidov, Valery Kuleshov and Yevgenia Rubinova). Some of them now teach at the Moscow onservatoire, the Russian Gnessin Academy of Music and other music institutions in Moscow.

While still a student he began to give recitals and to appear with orchestras. In 1970 he was a prize-winner at the International Enescu Competition in Bucharest. Since then he has frequently performed in recitals and with ensembles in addition to giving master-classes throughout the world. On numerous occasions he has appeared at international festivals and been a jury member at several international competitions.

Regularly gives concerts in Moscow (the Small and Rachmaninoff Halls of the Conservatoire and the Russian Gnessin Academy of Music) and in other Russian towns and cities.

Has frequently recorded on radio, records and CDs with music by Schumann, Chopin, Brahms, Tchaikovsky, Rachmaninoff, Scriabin, Medtner, Shostakovich and other composers. Has released more than ten discs together with the Japanese company Denon. Tropp’s disc from the series Russian Piano Miniature received the Japanese Academy of Recording Award. He has also recorded for the Japanese TV and radio company NHK.

There have been programmes about Tropp’s performances made by Kultura TV, Radio Orfei and Radio Russia.

For many years he has been involved in researching the legacy of Rachmaninoff. He has studied all of the accessible archives of the composer in Russia and internationally as well as publishing a series of articles about his music. He has taken part in films about Rachmaninoff made for TV in Great Britain and Russia. In November 2009 he performed a programme of works by Rachmaninoff in the auditorium where the composer gave his first appearance as a soloist.

He writes and presents many radio programmes about the great performers of the 20th century. Has written a series of annotations for releases of records featuring great musicians of the past as well as a series of articles focussing on the problems of performance itself. Honorary member of the societies Scriabin in America and Friends of Glenn Gould, acting member of the International Scriabin Society, Vice-President and member of the Board of the Rachmaninoff Society in Moscow, chair of the piano committee of the Moscow Music Society and honorary professor of the China Conservatory (Beijing).