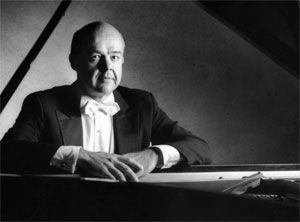 Alexander Toradze was born in Tbilisi in 1952 to the family of composer David Toradze and the film actress Liana Asatiani. In 1977 he graduated from the Moscow State Tchaikovsky Conservatory, where he was mentored by Yakov Zak, Boris Zemlyansky and Lev Naumov. That same year, he won the Van Cliburn International Piano Competition. In 1983 he emigrated to the USA, and from 1991 to 2017 was a professor at Indiana University South Bend, where he founded the Toradze Piano Studio.

Alexander Toradze has recorded piano concerti by Shostakovich with the Frankfurt Radio Symphony Orchestra under Paavo Järvi (the Pan label) and piano concerti by Prokofiev with the Mariinsky Orchestra under Valery Gergiev (Philips), as well as discs featuring works by Musorgsky, Stravinsky, Ravel and Prokofiev (Angel/EMI).
Musicians from Toradze’s studio tour successfully in the USA, Austria, Great Britain, Italy, Germany, Portugal and France.
Information for January 2020