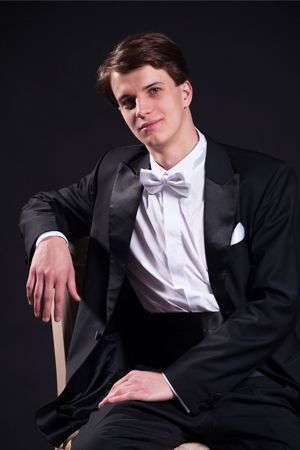 Alexander Sinchuk was born in the Primorsky Region. In 2002 he entered the Central School of Music of the Moscow State Tchaikovsky Conservatory, class of Nina Makarova. During his studies at the school he became a prize-winner at the All-Russian competition Young Talents of Russia and was a grant-recipient of the New Names foundation and the Vladimir Spivakov International Charity Foundation.

From 2006–2011 he studied at the Moscow Conservatory, class of Valery Pyasetsky. In 2008 he was named winner of the International Rachmaninoff Competition of Young Pianists in Moscow, while in 2012 he won the 1st prize and Gold Medal at the International Competition for Young Pianists in Memory of Vladimir Horowitz in Kiev. From 2012–2014 he studied at the University of Southern California Thornton School of Music (Los Angeles), class of Daniel Pollack.

Frequently appears on tour. In 2009 he made his debut at Carnegie Hall in New York, while in 2010 he undertook a major tour of the USA, giving thirty-seven concerts in cities throughout the country. That same year he recorded his first solo album at the Great Hall of the Moscow Conservatory. In December 2013 he performed every concerto by Sergei Rachmaninoff with the Russian Philharmonic Symphony Orchestra of Moscow under Dmitri Jurowski.

Has appeared at the Great Hall of the Moscow Conservatory, the Svetlanov Hall of the Moscow International House of Music and the Concert Hall of the Mariinsky Theatre; has toured to Serbia, Bulgaria, Ukraine, Italy, Spain, Portugal, Austria, Germany, Great Britain, France, Denmark, Luxembourg, Switzerland, Israel, the USA, Morocco, Puerto Rico, Turkey, China and South Korea.

Has taken part in the International Piano Festival in St Petersburg, Ohrid Summer (Macedonia), Creative Youth of the Moscow Conservatory, Les Pianos Folies in Le Touquet-Paris-Plage (France), the Festival of Classical Music at Wörthersee (Austria), the Music Festival on the Oder, the Copenhagen Summer Festival and the Bratislava Music Festival among others.

Actively involved in teaching. Since 2015 he has taught at the faculty of special piano of the Moscow Conservatory. Runs master-classes throughout Europe, America and Asia. Since 2019 he has been a senior lecturer at the faculty of music of the University of Arts in Belgrade.
Information for November 2019