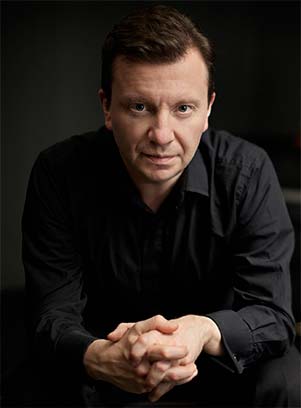 Piano
Evgeny Sinaiski comes from an acclaimed musical family and is a pianist who has dedicated his life to chamber performance and teaching, absorbing the traditions of both the Russian and western European schools.

Though young, Evgeny Sinaiski is an experienced teacher. In his career as a mentor he naturally combines the classical teaching traditions of St Petersburg with a contemporary approach to performance practice. His students include prize-winners at local and international chamber music competitions.

Evgeny Sinaiski was born in 1973 in Leningrad. He first studied music at the Lyceum School of the Latvian Academy of Music (Riga). In 1987 he entered the Middle Special School of Music of the Leningrad State Conservatoire, class of Marina Wolf. In 1997 he graduated from the St Petersburg State Rimsky-Korsakov Conservatoire (class of Marina Wolf) and completed a post-graduate study at the Royal Conservatoire in The Hague (class of Professor Naum Grubert). His teachers included Tamara Fidler, Sofia Vakman and Sergei Uryvaev.

Evgeny Sinaiski frequently appears in concerts as a soloist, ensemble-player and accompanist. He has performed at the Great and Small Halls of the St Petersburg Philharmonic, the Great Hall of the Moscow Conservatoire and the Tchaikovsky Concert Hall (Moscow), the Musikverein and the Konzerthaus (Vienna), the Große Saal of the Mozarteum (Salzburg), the Concertgebouw (Amsterdam), the Alte Oper (Frankfurt), the Herkulessaal (Munich), the Palais des Beaux-Arts (Brussels) and various concert halls in the USA, Italy and Great Britain.

Evgeny Sinaiski has performed with such acclaimed ensembles as the Moscow Philharmonic Symphony Orchestra, the Latvian Chamber Orchestra and the Symphony Orchestra of the Bolshoi Theatre (Minsk). Since 1996 Sinaiski has been a key participant at the Summer School Marktoberdorf (Germany), and since 2000 he has been a permanent concertmaster at the International Summer Academy of the Mozarteum (Salzburg).

From 2001 to 2010 the pianist taught a chamber ensemble class at the Middle Special School of Music at the St Petersburg State Conservatoire and at special music classes of the St Petersburg Philharmonic Society. Since 2010 he has been a Professor of Chamber Music at Vienna’s Konservatorium. Since 2011 he has taught the piano duet class at the Folkwang Universität der Künste in Essen. His pupils include prize-winners at international competitions of chamber ensembles. Evgeny Sinaiski collaborates with recording studios and radio stations including Gramola (Austria), TRK Peterburg (Russia), the BBC (Great Britain), Südwestrundfunk (Germany), Radio 4 (Netherlands) and Flemish Radio (Belgium).