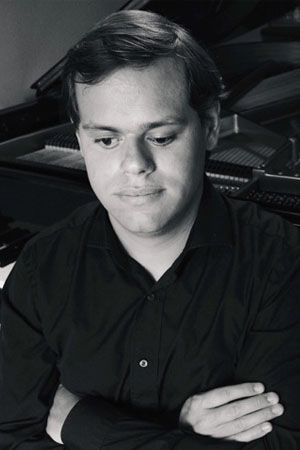 Ignasi Cambra is currently studying with pianist Maria João Pires as part of the Partitura Project, developed by her with the aim of advancing the careers of today’s most talented young pianists. A former student at the Juilliard School and Indiana University’s Jacobs School of Music, Cambra has amassed an unparalelled series of competition wins, concert appearances and fellowships.

Born in Barcelona, Ignasi Cambra was educated at the Lycée français there. He began to study music at age six at the Escola de Música de Barcelona with María Lluïsa Alegre and Albert Attenelle, and started performing concerts and participating in both solo and chamber music competitions at an early age. He has been awarded prizes at numerous competitions, both as a soloist and as a member of chamber music ensembles.

At Indiana University he studied under Edward Auer, Menahem Pressler and Alexander Toradze before moving to New York, where he was awarded a Master’s Degree from the Juilliard School, working with Jerome Lowenthal, Matti Raekallio and Choong Mo Kang. Cambra has been invited to festivals such as the Cincinnati Conservatory’s International Piano Institute in Prague, the Music Academy of the West in Santa Barbara and Chicago’s Ravinia Festival. In master-classes he has worked with Arnaldo Cohen, Ingrid Fliter, Joseph Kalichstein, Emanuel Krasovsky, Robert Levin, Seymour Lipkin and Robert McDonald among others. An avid chamber musician, he has also received coaching from Alon Goldstein, Frans Helmerson, Alexander Kerr, Mihaela Martin, Anton Nel, Peter Salaff and members of the Orion String Quartet.

Cambra’s performances have taken him to Weill Recital Hall at Carnegie Hall, the Kennedy Center’s Millennium Stage in Washington DC, the United Nations in New York City, the Auditori and the Palau de la Música Catalana in Barcelona, the Mariinsky Theatre in St Petersburg and the Ravinia Festival’s Bennet Gordon Hall in Chicago as well as other venues in Zaragoza, Madrid, Miami, Santa Barbara, Toronto and Indianapolis. He has collaborated with such conductors as Valery Gergiev, Tsung Yeh, Jordi Mora and Daniel Andai, and has performed with the Mariinsky Orchestra, the South Bend and Miami Symphony Orchestras and the Tbilisi Opera Orchestra among others.

Cambra has also been featured on radio and television in Spain, the United States and Canada, and is planning on releasing his first solo CD in 2017. Highlights for the 2016-17 season include concerts at the Gran Teatre del Liceu in Barcelona and the Auditorio Nacional de Música in Madrid.