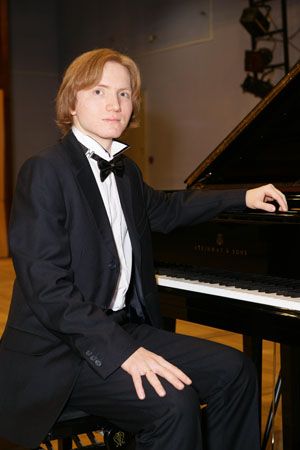 Mikhail Turpanov was born in Krasnoyarsk in 1989. At the age of five he began to study music. From 2003–2007 he studied at the Central School of Music of the Moscow Tchaikovsky Conservatoire. Graduated from the Moscow Conservatoire and completed an assistant traineeship (classes of Nikolai Petrov and Mikhail Voskresensky).

Prize-winner at numerous competitions including the XV International Tchaikovsky Competition (prize as “Best Performer in Round II”, 2015) and the III International Lothar-Shevchenko Piano Competition in Novosibirsk (1st prize, 2010). Regularly performs in towns and cities throughout Russia and Europe. Has performed with the symphony orchestras of Yekaterinburg, Voronezh, Yaroslavl, Volgograd, Krasnoyarsk, Oryol, Novosibirsk and Barnaul. Has collaborated with the National Philharmonic Orchestra of Russia, the Moscow chamber orchestra Musica Viva, the Chamber Orchestra of the Moscow Conservatoire and the State Academic Chamber Orchestra of Russia.

Has appeared at the festivals Pianoscope, Gradus ad Parnassum (with the support of Yamaha), Primavera Classica, Steps in the Snow, Renaissance, Spring in Russia, Russian Evenings and The Summer Music Festival in Copenhagen.

Has taken part in the concert series All of Nikolai Medtner’s Piano Concerti (released on CD by the Moscow Conservatoire).

Frequently performs contemporary music. As part of the project An Anthology of the Piano Music of Russia he has recorded works by Alfred Schnittke, Alexander Vustin and Nikolai Karetnikov. Has performed a series of Russian and world premieres of works by Yuri Butsko, Ivan Sokolov, Chaya Czernowin and Shirvani Chalaev.