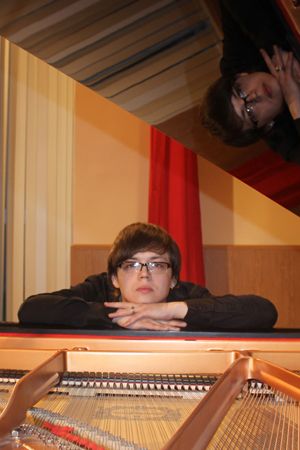 Nikolai Medvedev was born in 1986. Studied at the Krasnodar Rimsky-Korsakov Music College, the Krasnodar State University of Culture and Arts, the Gnessin Russian Academy of Music (classes of Alexei Skavronsky and Tatiana Zelikman) and undertook a postgraduate study at the academy (class of Tatiana Zelikman). Has taken lessons from Emanuel Krasovsky, Vladimir Tropp, Nikolai Petrov, Dmitry Bashkirov, Alexander Mndoyants, Jerome Rose, Vladimir Viardo, José Ribera and William Noll. Has been a grant-recipient of the Russian Culture Foundation, the Glazunov Foundation, the New Names foundation and the Russian Performing Arts foundation. In 2010 he received the Triumph youth prize. Currently teaches at the Gnessin Russian Academy of Music (assistant to Tatiana Zelikman and Vladimir Tropp).

Appears in cities throughout Russia, Europe and the USA and performs concerts at the Moscow State Tchaikovsky Conservatoire, the Tchaikovsky Concert Hall, the Moscow House of Music, the Bolshoi Theatre, the Gnessin Russian Academy of Music, the Concert Hall of the Mariinsky Theatre, the St Petersburg State Philharmonic and various other venues in Yekaterinburg, Saratov, Yaroslavl, Minsk, Kiev, Paris, Copenhagen, Bergen, Cologne and Düsseldorf. Has taken part in the international festival A Week of Rostropovich in Moscow and the International Piano Festival in St Petersburg.

Since 2008 he has been involved in the production 1900 staged by the 814 Theatre Association. In 2014 he performed the Russian premiere of Vladimir Dashkevich's piano concerto Purgatory (the second part of the trilogy The Divine Comedy XXI).