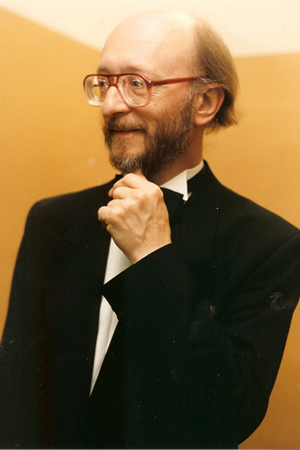 Alexei Lyubimov was born in Moscow in 1944. From 1963–1968 he studied at the Moscow State Tchaikovsky Conservatory, classes of Heinrich Neuhaus and Lev Naumov.

After completing his education, he began to study early music, performing historic harpsichords and pianos. He was one of the founders of the Moscow Baroque Quartet (1975) and the Academy of Early Music (1982). He also frequently performs contemporary music. From 1969-1974 he led the ensemble Music for the 20th Century, which under his direction gave the first performances in Russia of numerous works by Boulez, Stockhausen, Cage and many other composers. It was also thanks to Lyubimov that many works by Silvestrov, Pärt, Volkonsky, Schnittke, Denisov and Ustvolskaya found life on the concert platform.

Initiator and Artistic Director (until 1992) of the international festival of avant-garde and experimental music Alternative. In 1997 he headed the faculty of historic and contemporary performance at the Moscow Conservatory, where for the first time in Russia programmes were introduced for the study of performing early instruments. Since 1998 he has been a professor at the Mozarteum University in Salzburg.

Recent engagements include participating in the stage project This Is (not) a Dream to music by Erik Satie and John Cage, and he has appeared in duo with Alexei Zuev, in addition to giving chamber music concerts and recitals in Bruges, Potsdam, Paris, Amsterdam, Berlin and Moscow.

Works with the recording companies Melodiya, Erato, BIS, Emi, Teldec and Sony. His discography includes recordings of all of Mozart’s piano sonatas, as well as works by Schubert, Chopin, van Beethoven, Brahms and composers of the 20th century. Together with ZZT/Outhere France, on historic instruments he has recorded impromptus by Schubert, van Beethoven’s last sonatas, all of Mozart’s works for two pianos (with Yury Martynov) and a piano version of Seven Last Words of Christ on the Cross. Since 2003 he has been an exclusive artist for ECM, in collaboration with which he has recorded preludes by Debussy and Cage’s As It Is (together with Natalia Pshenichnikova).