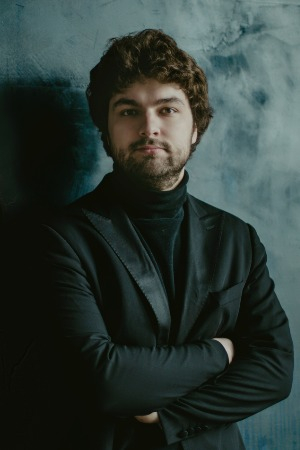 In terms of the dazzling nature of his gift, unusual musicality and the integrity of his world-view the pianist is indeed totally unique. At the age of twenty-two the musician plays with great maturity. His ability for concentration is staggering. It is surprising that he, still so young, made no display of striving for the purpose of show, of playing to an audience. Without a shadow of doubt: only true dedication to music and listening to the deep and intrinsic meanings that the composer has entrusted to the performer.
Gyulara Sadykh-zade, Vedomosti (“The News”)

While his peers are doing their best to charm everyone around, including the global music industry, Mr Geniušas has embarked on an altogether more serious mission: an agonising search for a performance style that is fully modern and catching the spirit of the age.
Yulia Bederova, Kommersant (“The Businessman”)

Lukas Geniušas was born in 1990 in Moscow to the family of pianists Xenia Knorre and Petras Geniušas. Started studying the piano at the age of five. Graduated from the Chopin Moscow State College of Musical Performance (class of Vera Gornostayeva), and in 2013 he graduated from the Tchaikovsky Moscow State Conservatory (class of Vera Gornostayeva), subsequently taking a trainee-assistantship there (class of Pavel Nersessian).

Since 2016 he has run the NikoFest at the Niko Art Gallery in Moscow together with his wife, the pianist Anna Geniushene. Took part in the charity concert Stand up and Go!, the Music of Light festival with outstanding musicians in Moscow and Vladimir and the annual concert series Looking at the Stars for prisoners in several cities in Canada. Tours throughout Russia, Europe and the USA. Has appeared at Wigmore Hall in London, the Concertgebouw in Amsterdam, the Salle Gaveau in Paris, the Auditorium du Louvre, the Conservatorio di Musica Giuseppe Verdi di Milano, the Teatro Carlo Felice in Genoa, the Concert Hall of the Mariinsky Theatre, the Grand and Small halls of the Moscow Conservatory and the Grand Hall of the St Petersburg Philharmonia among other venues.

Has recorded works by Chopin, Rachmaninoff, Beethoven and Brahms on the labels NIFC, Art Classic, Piano Classics and DUX. In 2015 Melodiya released the pianist’s solo disc Emancipation of Consonance featuring works by Leonid Desyatnikov, Vladimir Ryabov and Valery Arzumanov, and in 2016 there followed a disc of works by Stravinsky, Tchaikovsky and Desyatnikov recorded together with Aylen Pritchin. Together with five other pianists Geniušas took part in a recording of Vsevolod Zaderatsky’s 24 Preludes and Fugues (Melodiya, 2016). In 2017 there came the album 3х3: Live with a concert recording of piano trios by Shostakovich, Weinberg and Ravel (Melodiya and Apriori Arts Agency; together with Aylen Pritchin and the cellist Alexander Buzlov), as well as a CD with Shostakovich’s First Concerto, recorded with the Tatarstan National Symphony Orchestra and conductor Alexander Sladkovsky. In 2018 the French label Mirare released Geniušas’ disc of sonatas and pieces by Prokofiev, which won the Diapason d’Or award in 2019. In 2021 together with the pianist Philipp Kopachevsky he released the album 24 Preludes, featuring works by Rachmaninoff and Scriabin.
Information for November 2021