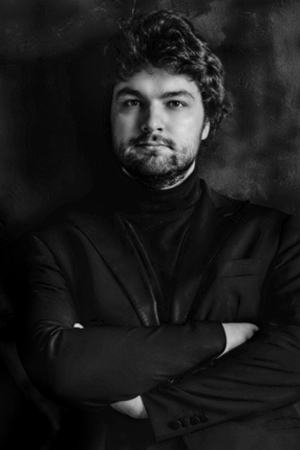 “While his peers are doing their best to charm everyone around, including the global music industry, Mr Geniušas has embarked on an altogether more serious mission: an agonising search for a performance style that is fully modern and catching the spirit of the age.”
Kommersant

Lukas Geniušas was born in 1990 in Moscow to the family of pianists Xenia Knorre and Petras Geniušas. Started studying the piano at the age of five. Studied at the Children's School of Music of the Moscow State Frédéric Chopin College of Music. In 2004 he became a grant-recipient of the Mstislav Rostropovich Charity and Support Foundation. In 2013 he graduated from the Moscow State Tchaikovsky Conservatory, where he studied under his grandmother Vera Gornostaeva, and continued his studies as a post-graduate trainee.

Since 2016 he has run the NikoFest at the Niko Art Gallery in Moscow together with his wife, the pianist Anna Geniushene. Took part in the charity concert Stand up and Go! , the Music of Light festival with outstanding musicians in Moscow and Vladimir and the annual concert series Looking at the Stars for prisoners in several cities in Canada. In the 2019–1920 season he will be appearing for the first time with the Philadelphia Orchestra and the Yomiuri Symphony Orchestra (Japan), as well as at the Irving Gilmore Piano Festival and at Paris' Salle Gaveau.

Has recorded works by Chopin, Rachmaninoff, Beethoven and Brahms on the labels NIFC, Art Classic, Piano Classics and DUX. In 2015 Melodiya released the pianist's solo disc Emancipation of Consonance featuring works by Desyatnikov, Ryabov and Arzumanov, and in 2016 there followed a disc of works by Stravinsky, Tchaikovsky and Desyatnikov recorded together with Aylen Pritchin. Together with five other pianists, Geniušas took part in a recording of Vsevolod Zaderatsky's 24 Preludes and Fugues (Melodiya, 2016). In 2017 there came the disc Apriori Melody with a concert recording of piano trios by Shostakovich, Weinberg and Ravel (together with Aylen Pritchin and Alexander Buzlov), as well as a disc with Shostakovich's First Concerto, recorded with the State Symphony Orchestra of the Republic of Tatarstan and Alexander Sladkovsky. In 2018 the French label MIRARE released a disc of sonatas by Prokofiev, which won the Diapason d'Or award in 2019.
Information for July 2019