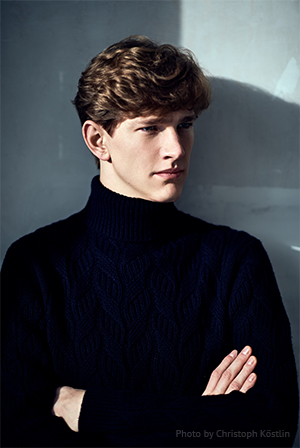 A pianist who makes every note count.

A musician of unusual refinement and imagination.

Jan is perhaps the most “complete” pianist of his age.

Jan Milosz Lisiecki was born in Calgary (Canada) in 1995. At the age of five he commenced his piano studies at the Conservatory at Mount Royal Junior College (Calgary), giving his first concert at the age of nine.

In 2010 he released his debut recording – a disc featuring piano concerti by Chopin. Subsequent albums have been recorded in collaboration with Deutsche Grammophon: Piano Concerti Nos 20 and 21 by Mozart (2012), Études by Chopin (2013), Schumann’s Piano Concerto and other works (2016), works for piano and orchestra by Chopin (2017; that same year the CD was awarded the ECHO KLASSIK prize, while in 2018 it received the JUNO Award), Piano Concerti Nos 1 and 2 and other opuses by Mendelssohn (2019), the complete Beethoven’s piano concerti (2019) and Lieder by Beethoven including the song cycle An die ferne Geliebte (2020; together with Matthias Goerne).

In 2012 he was appointed a UNICEF Good Will Ambassador.

In 2019 he played a decisive role in SchumannVR – a virtual reality installation created with the support of the Tonhalle Düsseldorf, which was dedicated to the life of Robert and Clara Schumann.

Recipient of the Leonard Bernstein Award at the Schleswig-Holstein Musik Festival (2013) and a Gramophone Classical Music Award as best young performer (2013) among other accolades. In 2009 Canadian TV produced the documentary film The Reluctant Prodigy about the musician.
Information for June 2021