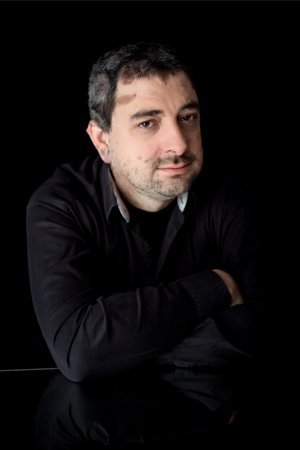 "To say that Mr. Lifschitz made his playing look easy would not be quite accurate. What he offered was a performance of such poetry that the question of whether executing it was difficult hardly came to mind.”
New York Times

“Lifschitz maximised the instrument's potential for colour and tonal variety (...) the gentle, unshowy authority of his stage manner, that he was most persuasive, emphasising the work's qualities as living music as opposed to historic monument.”
The Guardian

Konstantin Lifschitz has established a worldwide reputation for performing extraordinary feats of endurance with integrity and persuasive beauty.

Born in Kharkov (Ukraine) in 1976, at the age of five, Konstantin Lifschitz was enrolled in the Gnessin Special School of Music in Moscow as a student of Tatiana Zelikman. He graduated from the Gnessin State Musical College (classes of Tatiana Zelikman and Vladimir Tropp). Also studied with Alfred Brendel, Leon Fleisher, Teodor Gutman, Hamish Milne, Charles Rosen, Karl Ulrich Schnabel, Fou Ts'ong and Rosalyn Tureck.

In the early 1990s Konstantin Lifschitz received a grant from the Russian Cultural Foundation. Around that time, he began to appear in European cities including Paris, Amsterdam, Vienna, Munich and Milan. In 1995 he received the ECHO Klassik Award as “Most Promising Artist of the Year” for his first recording, and the following year he was nominated for a Grammy award for Bach’s Goldberg Variations.

Konstantin Lifschitz’s most recent album Saisons Russes featuring works by Ravel, Debussy, Stravinsky and Jakoulov was released on the Orfeo label in November 2016. As a prolific recording artist, he has produced numerous CDs and DVDs, many of which have received rave reviews. Lifschitz has made several recordings with the Orfeo label including Bach’s Musikalisches Opfer, the St Anne Prelude and Fugue and Three Frescobaldi Toccatas (2007), Gottfried von Einem's Piano Concerto with the Vienna Radio Symphony Orchestra (2009), Brahms' Second Concerto and Mozart's Concerto K. 456 under Dietrich Fischer-Dieskau (2010), Bach's Die Kunst der Fuge (2010), the complete Bach Concertos for Keyboard and Orchestra with the Stuttgart Kammerorchester (2011) and the Goldberg Variations (2015). In 2008, a live recording of Lifschitz's performance of Bach's Well-Tempered Clavier (Books I and II) at the Miami International Piano Festival was released on DVD by VAI. In 2014, Beethoven’s complete Violin Sonatas with Daishin Kashimoto was released by Warner Classics.

Konstantin Lifschitz is a Fellow of the Royal Academy of Music in London and has been appointed a professor of the Lucerne University of Applied Sciences and Arts (2008).

In 2017 autumn, he launches the complete Beethoven sonatas cycles (8 concerts) in Hong Kong, Taipei and Taichung and performs various works by Beethoven and Bach in Tokyo, Shanghai, Nicosia, Maastricht, Berlin or Omsk. He will also be part of the Stravinsky Year Gergiev’s project and will be the soloist in the Grand Hall of the Moscow Conservatoire Grand Hall with the concertos by both Stravinsky and Bach.