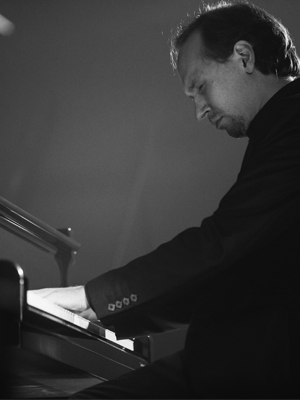 He has toured in more than 60 cities in Russia, as well as in Australia, Austria, Armenia, Belgium, Great Britain, Germany, Spain, Italy, China, Portugal and France. He has taken part in concert programs of the Russian Performing Art Foundation, Vladimir Spivakov and Mstislav Rostropovich foundations.

At the age of six, Alexei Kurbatov composed a ballet, and at 11, gave his first concert as a composer in the Organ Hall of the Glinka Museum of Musical Culture. As of today, the portfolio of the composer includes the symphonic poem 1812, the poem for the reader and the trio The Leningrad Apocalypse (commissioned by the Daniil Andreev’s widow), six symphonies, the opera Black Monk, seven instrumental concerts, multitudes of chamber and vocal pieces, and music scores for films and theater productions.

Alexei Kurbatov has collaborated with Yuri Bashmet, Alan Buribaev, Vladimir Ponkin, Alexander Rudin, Sergey Skrypka, Alexei Volodin, Alexander Gindin, Peter Laul, Konstantin Lifshits, Rem Urasin, Graf Murzha, Boris Adrianov and Alexander Buzlov among others. He has been a jury member at many international competitions and has given master-classes in many cities in Russia.
Information for December 2018