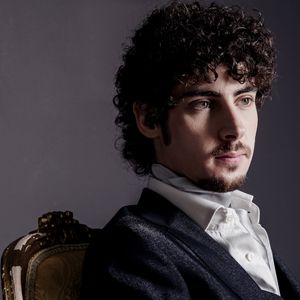 The 2018-19 seasons sees Federico Colli’s debuts with the Hamburger Symphoniker (Ion Marin) and Deutsche Staatsphilharmonie Rheinland-Pfalz (Lukasz Borowicz), as well as returns to the Philharmonia Orchestra (Andrew Nethsingha) and the Janáček and Rijeka philharmonics.

He makes his recital debuts in New York (Lincoln Center), Berlin (Konzerthaus), Amsterdam (Concertgebouw) and Seoul (Kumho Art Hall), as well as his first appearances at Wigmore Hall and Lucerne Piano Festival, and U.S. orchestra debut with the Stamford Symphony. Earlier this year, he performed at Royal Albert Hall and at the Ravinia Festival. Colli records exclusively for Chandos Records, with whom he released his first album in May 2018.

The second album, with works by Bach and Bach-Busoni, will follow in 2019. To coincide with his debut at the Southbank Centre’s International Piano Series in April 2014, Colli’s debut solo CD, produced by Champs Hill Records, was released to great critical acclaim, featuring works by Beethoven, Scriabin and Mussorgsky.

Born in Brescia in 1988, Federico studied at the Milan Conservatory, the Imola International Piano Academy and the Salzburg Mozarteum under the guidance of Sergio Marengoni, Konstantin Bogino, Boris Petrushansky and Pavel Gililov. In 2011 he received a ‘Grosso d’Argento’ from the mayor of Brescia in recognition of his artistic achievements, and in 2014 he was selected by International Piano magazine as one of the “30 pianists under 30 who are likely to dominate the world stage in years to come.”
Information for December 2018