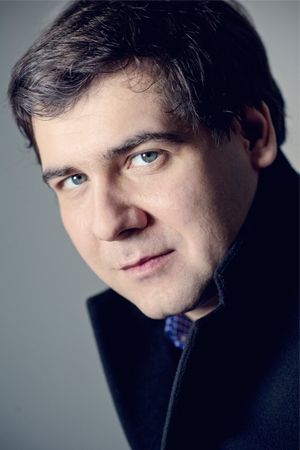 Vadym Kholodenko was born in Kiev in 1986. At the age of thirteen he began to make appearances in the USA, China, Hungary and Croatia. In 2010 he graduated from the Tchaikovsky Moscow State Conservatory, and in 2013 he completed a postgraduate study there (class of Vera Gornostayeva).

Has appeared with the Ensō String Quartet (USA) and the violinists Vadim Repin and Alena Baeva and the cellist Alexandre Bouzlov.

In 2013 the harmonia mundi label released the pianist’s first CD (three highlights from the ballet Pétrouchka by Stravinsky and Transcendental Études by Liszt). In 2015 Melodiya released a solo album by Vadym Kholodenko featuring works by Balakirev, Tchaikovsky, Kurbatov and Chaplygin, and in 2017 there came a concert recording of works by Hindemith, Berg and Hugo Wolf, produced in collaboration with Melodiya and Apriori Arts Agency. His harmonia mundi discography also includes Grieg’s Piano Concerto, Saint-Saëns’ Second Piano Concerto (both CDs were named “Editor’s Choice” by Gramophone magazine) and the complete piano concerti by Prokofiev. Together with the label Arthaus he made a DVD recording of Prokofiev’s Fifth Piano Concerto with the Mariinsky Orchestra under Valery Gergiev. A solo album released by harmonia mundi featuring works by Scriabin (2018) received the Diapason d’Or award.
Information for December 2020