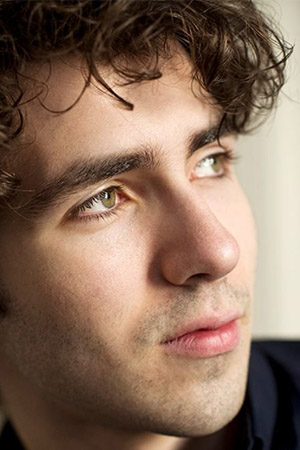 Alexandre Kantorow was born in 1997 in Clermont-Ferrand to a family of musicians. He began to study piano at the age of five at the Conservatoire à rayonnement régional de Cergy-Pontoise. At the age of 11 Kantorow began studies with Pierre-Alain Volondat, and continued training with Igor Lazko at the Schola Cantorum de Paris, as well as with Frank Braley and Haruko Ueda. Later he studied at the École Normale de Musique de Paris in Rena Shereshevskaya’s class.

When he was 16 years old, Kantorow was invited to play at the Lа Folle Journée festival in Nantes and has since appeared at such festivals as the Festival International de Piano de La Roque-d’Anthéron, the festival Chopin à Paris and the festival Piano aux Jacobins.

At the age of 17 he performed at the Philharmonie de Paris with the Pasdeloup Orchestra at its inaugural season to an audience of about 2,500. Since then he has played with many orchestras, such as the Kansai Philharmonic, Taipei Symphony Orchestra, Liège Royal Philharmonic Orchestra, Geneva Orchestra, Bern Orchestra and the Orchestre National du Capitole de Toulouse among others. He has since appeared at major concert halls including the Konzerthaus Berlin, Concertgebouw in Amsterdam, the Bozar in Brussels and the auditorium in the Louis Vuitton Foundation.

In 2019 Kantorow won the 1st prize, Gold Medal and Grand Prix at the International Tchaikovsky Competition. With this win, he became the first French winner in the history of the competition. Further to his victory, Valery Gergiev asked Kantorow to accompany him and the Mariinsky Orchestra for a series of concerts in Europe.

His BIS recording À la russe (BIS-2150) has won many awards and distinctions including Choc de l’Année (Classica), Diapason découverte (Diapason), Supersonic (Pizzicato) and CD des Doppelmonats (PianoNews). For BIS he has also recorded piano concertos by Liszt (BIS-2100) and Saint-Saëns (BIS-2300), and a recital including rhapsodies by Brahms, Bartók and Liszt (in preparation).

In 2019 he was nominated for the Victoires de la musique classique in the Instrumental Solo Revelation of the Year category and received the Critic Prize, “Musical revelation of the year”.
Information for November 2019