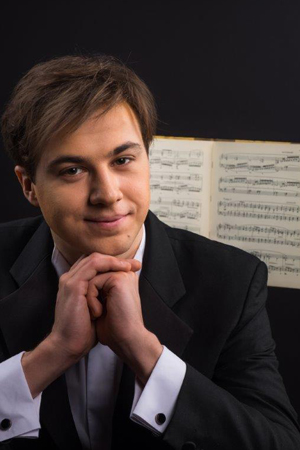 Dmitry Kalashnikov was born in Moscow in 1994. Graduated with distinction from the Moscow Middle Gnessins School of Music (class of Ada Traub and Tatiana Vorobieva) and the Moscow State Tchaikovsky Conservatory (class of Elena Kuznetsova). He is currently a postgraduate at the Royal College of Music in London (class of Vanessa Latarche).

Prize-recipient at numerous international competitions. Grant-recipient of the New Names foundation, the International Yuri Rozum Charitable Foundation and the Revival foundation for cultural development. Has received the prize of the Support for Talented Youth of the Government of the Russian Federation, the City of Moscow Prize and the George Stennett Award, supported by a Neville Wathen Scholarship.

Gives recitals at the Moscow Conservatoire, the Russian Gnessin Academy of Music, the Moscow International House of Music, London’s Wigmore Hall and at various venues in France, Austria, Poland, Estonia, Italy, Belgium and the United Kingdom.

Has appeared on several occasions with the Russian National Orchestra under the baton of Mikhail Pletnev and in a duet with Pletnev on two pianos (conducted by Mischa Damev). In 2017 he gave a recital at the International Piano Festival. In December 2018 he appeared at the Concert Hall of the Mariinsky Theatre with the Mariinsky Orchestra.

Takes part in various projects of the State Tretyakov Gallery. For several years he has run artistic soirees with the artist Gavriil Kochevrin for charitable events for orphans at the Marina Tsvetaeva House Museum. These concert performances have seen the participation of Yevgeny Knyazev, Alexander Rudin and Boris Andrianov.

In September 2019 he took part in the opening of the season at the Nizhny Novgorod State Opera and Ballet Theatre. In November that year he was the victor of the Jaques Samuel Piano Competition in London for students at academic music institutions. Engagements for 2020 include appearances in Great Britain, Italy, Canada, France, Portugal and Japan.
Information for December 2019