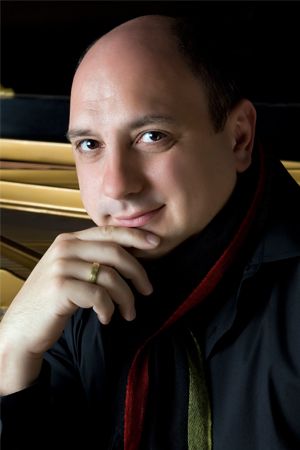 “George Vatchnadze is one of the freshest and most exiting young pianists to come along in a long, long time.”
Listener

George Vatchnadze has appeared with orchestras and in recital throughout the United States, Canada, Great Britain, The Netherlands, Finland, Italy, Israel, Russia, Japan, Taiwan and Central and South America. Among other music forums, he has performed at the Hollywood Bowl Festival, the Ravinia Festival, the Stresa Festival and the Rotterdam Philharmonic’s Philips-Gergiev festival. He has also been a frequent guest at St Petersburg’s White Nights and the Mikkeli (Finland) festivals. In 1997 Vatchnadze made a sensational recital debut at the prestigious Edinburgh International Festival and received the “Herald Angel Award” from the Scottish Herald newspaper. He has appeared on live broadcasts by Dutch National Radio, the BBC and NPR’s Performance Today. In 1999 Vatchnadze made his New York recital debut at Lincoln Center’s Alice Tully Hall. Critic and writer Faubion Bowers wrote in American Record Guide that “Vatchnadze is a consummate artist, now at the height of his musical and intellectual powers. He can do absolutely anything he wants at the piano. He commands delicate pianissimi, massive diapasons and everything in between.”
George Vatchnadze’s engagements have included performances with the Mariinsky Orchestra under the baton of Gianandrea Noseda at the Mariinsky Theatre itself in St Petersburg and at London’s Covent Garden, as well as appearances at the Salzburg Festival, the Maggio Musicale festival, the Stresa Festival, the Gilmore Festival, the Ravenna Festival, London’s Wigmore Hall and New York’s Miller Theater.
His most recent engagements have included appearances at Strathmore Hall in Washington DC, the Woodstock Festival (New York State), the Stanford Stravinsky Festival, the Pacific Symphony Rachmaninoff Festival, a residency at the SYArts Festival in Taiwan and performances in Japan. George Vatchnadze has recorded two CDs with the Tbilisi Symphony Orchestra under Maestro Jansug Kakhidze featuring Rachmaninoff’s Second Concerto and Ravel’s Concerto for the Left Hand for the Sony and Excelsior Labels. Both recordings were re-released several times and have received the highest critical acclaim. He was also part of the Frankfurt Radio Symphony’s CD recording alongside Alexander Toradze and Paavo Järvi. Vatchnadze’s latest CD will be released this year with the piano music of Giya Kancheli and music for cello and piano by Sulkhan Tsintsadze.
George Vatchnadze studied at Indiana University South Bend, the Mannes College of Music, the Tbilisi State Conservatoire and the Tbilisi Central Music School for Gifted Children. His teachers included Alexander Toradze, Arkady Aronov, Wanda Shiukashvili and Larisa Bakhtadze. He is a winner of numerous international piano competitions including the 1994 Gina Bachauer Competition, the 1998 Palm Beach Invitational Competition, the 1996 Alabama Competition and the 1997 World Piano Competition.
George Vatchnadze is currently an Associate Professor and the head of the Piano Department at DePaul University School of Music in Chicago. His students have won top prizes at several international competitions and have performed extensively throughout the world.