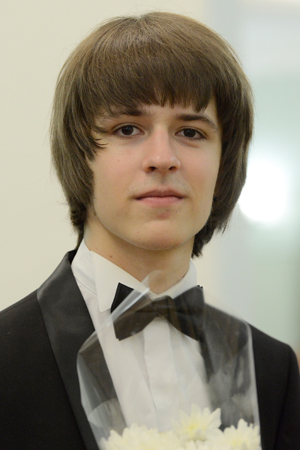 Evgeny Evgrafov was born in Moscow in 2002. Graduated from the Gnesins Musical College of the Gnesins Russian Academy of Music. Since 2019 he has been a student of the Tchaikovsky Moscow State Conservatory (piano class of Andrei Diev, composition class of Alexander Tchaikovsky).

Has performed with orchestras under numerous Russian conductors, as well as under Volodymyr Sirenko, George Aravidis, Nyamaa Tuulaikhuu and Gudni Emilsson.

Participant in the International Festival of Contemporary Music Moscow Autumn (2015, 2017, 2019) and the festival Young Musicians of Moscow – Marking 85 Years Since the Birth of Sergei Slonimsky (2017–2018).

Has composed over two hundred and fifty works for piano. Prize-winner at the Dmitri Kabalevsky International Music Competition (Moscow – St Petersburg, 2017; 1st prize in the category “Composition”) and the Yuri Kholopov All-Russian Competition in the Theory and History of Music and Composition (Moscow, 2019; 2nd prize).

Has been a participant in programmes of the St Petersburg Music House since 2018.
Information for September 2020