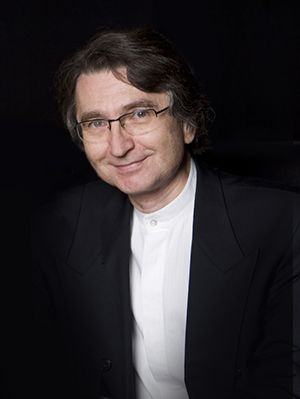 Born in 1949, Yevgeny Korolyov is known to have an extraordinary presence on the international piano scene. Far from displaying any kind of showmanship, Korolyov fascinates his public through his profound intellectual understanding of the works he performs and in the service of which he places the wide range of his artistic and interpreting abilities.
Korolyov’s teacher was Anna Artobolevskaya at the Central School of Music in Moscow, where he also studied with Heinrich Neuhaus and Maria Yudina. He continued his studies at the State Tchaikovsky Conservatoire under Lev Oborin and Lev Naumov. Korolyov won the Grand Prix Clara Haskil in Montreux-Vevey in 1977 as well as several other prizes at international competitions, including the Bach Competition in Leipzig in 1968, the Van Cliburn Competition in 1973 and the Bach Prize in Toronto in 1985. He has lived in Hamburg since 1978, holding a professorship at the Hamburg Hochschule für Musik und Theater.
Although his wide repertoire ranges from Bach, the Viennese classics and the works of Schubert, Chopin and Debussy to the modern classics Messiaen and Ligeti, Korolyov has a special affinity with Bach. Already by the age of seventeen he had performed the entire Well-Tempered Clavier in Moscow. Since then, Korolyov has often performed Bach’s greatest works in cycles, including the Clavierübung and the Art of the Fugue, which he recorded on CD. The latter recording provoked a memorable reaction from the composer György Ligeti: “If there was only one CD I could take with me to an uninhabited island, I would choose Korolyov’s recording of Bach, because even when left pining away with hunger and thirst, I would still listen to this recording again and again, even to my last breath.”
Korolyov has performed at a great number of venues, including the Gewandhaus in Leipzig, the Herkulessaal in Munich, the Konzerthaus in Vienna, the Conservatorio Verdi in Milan, the Théâtre des Champs-Élysées in Paris and the Teatro Olimpico in Rome. Highlights in recent seasons include appearances in Dresden, Moscow, Budapest, Luxemburg, Brussels, Antwerp, Lyon, Milan and Turin as well as a concert tour to Japan. He has given guest performances at numerous festivals such as the Rheingau Musik Festival, the Schleswig-Holstein Musik Festival, the Schwetzingen SWR Festival, the Salzburg Festival, the Montreux Festival, the Kuhmo Festival, the Glenn Gould Festival in Groningen, the Chopin Festival in Warsaw, the Budapest Spring festival and Settembre Musica in Turin. He is also a regular guest at Ferrara Musica and the festival of the International Bach Academy in Stuttgart.
With the Goldberg Variations, Korolyov has been acclaimed at the Salzburger Festspiele Pfingsten und Barock, the Bachfest in Leipzig (which was recorded by EuroArts for a DVD and NHK Tokyo for TV broascast), the Bachfest Montreal, the Alte Oper in Frankfurt, the Laeiszhalle in Hamburg and the Concertgebouw in Amsterdam. Together with his duo partner and wife Ljupka Hadzigeorgieva, two of his previous master students and the Bach-Collegium Stuttgart under conductor Helmuth Rilling, Yevgeny Korolyov has performed Bach’s multiple concerti (for one to four pianos) in Hamburg, Hanover, Frankfurt and Munich as well as the 2012 La Roque d’Anthéron festival. Following an invitation from Valery Gergiev in 2012, Korolyov performed Mozart concerti with the Mariinsky Orchestra in St Petersburg. He also performed Bach concerti with the Kremerata Baltica in 2012.
A passionate chamber musician, Korolyov has played with colleagues such as Natalia Gutman and Mischa Maisky and the Auryn, Keller and Pražák Quartets. He often performs alongside pianist Ljupka Hadzigeorgieva, with whom he forms the Duo Korolyov.
Yevgeny Korolyov has recorded for TACET, Hänssler Classic, Profil and the label of Hessischer Rundfunk. His interpretations of Bach in particular have elicited enthusiastic responses from the international music press. EuroArts released a DVD of his performance of the Goldberg Variations in 2008. TACET recently released CDs with various piano works by Chopin (Ballade No 4, Scherzo No 4, Barcarolle Op. 60 and Nocturnes) and Bach for piano and piano duo (with Ljupka Hadzigeorgieva) arranged by Kurtág, Liszt and Korolyov himself.
Highlights of the 2013–14 season include performances in Antwerp, Berlin, Hamburg, Budapest, Barcelona and Lisbon.