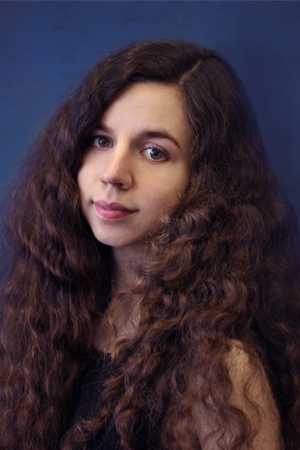 Dukhovlinova was a student of the St Petersburg Rimsky-Korsakov State Conservatory (Tatiana Zagorovskaya’s class) from 2012 to 2017. She also learnt to play the harpsichord with Ivan Rozanov, studied playing the organ under Marina Väisä and studied composition under Anatoly Korolev. Dukhovlinova participated in Sir András Schiff’s master classes. Currently she is working towards a master’s degree at the Institute of Music Theatre and Dance of the Herzen State Pedagogical University of Russia.

She has been awarded with the St Petersburg Government Young Talent prize and Andrey Petrov Scholarship. Dukhovlinova has also won a grant from the International Wagner Society and the Bayreuth Festival.

The pianist has won prizes at international music competitions and festivals in Russia, Estonia, Serbia, Austria, France, and Italy. She holds a performing mastery certificate of the International Music Academy. In 2011, the musician won the special jury prize at the Ile de France International Piano Competition.

Dukhovlinova has performed recitals in Russia, Germany and France both as a pianist and an organist. She also performs her own music and takes part in contemporary music festivals.
Information valid for April 2018