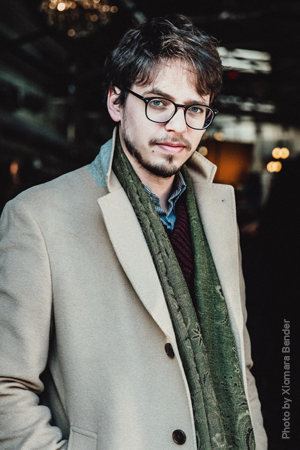 There hasn’t been a foreign pianist who has caused such a stir since Glenn Gould’s arrival in Moscow in the midst of the Cold War, or Van Cliburn’s victory at the Tchaikovsky Competition.
Olivier Bellamy, Le Huffington Post

Lucas Debargue was born in 1990 in Paris. At the age of eleven he began to study music at the Conservatoire de Compiègne (class of Christine Muenier). Ten years later, after graduating from the Faculty of Letters, Arts and Cinema at the Université Paris Diderot – Paris VII, he resolved to dedicate his life to the piano. In 2011, after one year of studies at the Conservatoire de Beauvais (class of Philippe Tamborini), he entered the Conservatoire de Rueil-Malmaison, class of Rena Shereshevskaya, under whom he later studied at the École Normal de Musique in Paris.

In 2014 he won 1st prize at the International Adilia Alieva Piano Competition in Gaillard (France), and in 2015 he won 4th prize at the XV International Tchaikovsky Competition and became the only artist to receive the prize of the Moscow Association of Music Critics at that competition. The musician was soon to make his debut at the Mariinsky Theatre. In 2016 Debargue graduated from the École Normal de Musique, receiving the special Alfred Cortot Prize, subsequently training for a further year under Shereshevskaya as part of a postgraduate study at that institution.

Performs lesser-known works Nikolai Medtner, Nikolai Roslavets, Samuel Maykapar and Miłosz Magin; studies composition and performs his own works. In 2017 Debargue’s concertino Orpheo di camera for piano, percussion and strings was performed by the Kremerata Baltica orchestra in Latvia, and his Piano Trio was played at the Louis Vuitton Foundation in Paris. Debargue’s Symphonic Quartet was premiered in 2018 at the Zaryadye concert hall.

April 2016 saw the release of the musician’s first disc, featuring works by Domenico Scarlatti, Chopin, Liszt and Ravel; in September the same year came a second disc of music by Medtner, van Beethoven and Bach; in 2017 came a third, of piano sonatas by Schubert and Szymanowski, as well as a recording of Messiaen’s Quatuor pour la fin du temps, made together with Martin Fröst, Janine Jansen and Torleif Thedéen; 2019 saw the release of an album of four discs with recordings of sonatas by Domenico Scarlatti (Scarlatti: 52 Sonatas), with received the prestigious Choc de Classica award and was included by National Public Radio (USA) in a list of “10 classical albums to usher in the next decade”.

In 2017 the pianist received an ECHO Klassik award. That same year, the documentary film Lucas Debargue: tout à la musique was released (directed by Martin Mirabel, Bel Air Media), which talks of the musician’s career following his victory at the Tchaikovsky International Competition.
Information for September 2020