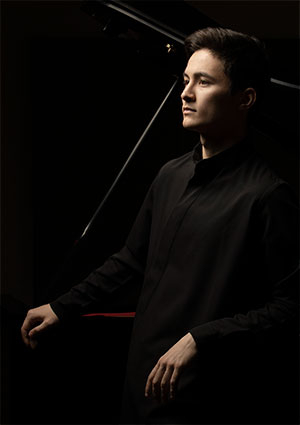 “Arseny Mun has brought a sincere and unique feeling of poetry to music!”
D Magazine (Dallas)

Arseny Mun was born in St Petersburg in 1999. At the age of six he began to study the piano under Elena Zyabreva. In 2010–2017 he studied under Alexander Sandler, initially at the Secondary Special Music School of the Rimsky-Korsakov St Petersburg State Conservatory and subsequently at the conservatory itself. He is currently a student of Sergei Babayan at the Juilliard School in New York.

In 2009 he made his debut with a symphony orchestra at the St Petersburg Philharmonia, and in 2014 he gave his first recital at the Mozarthaus in Vienna.

Recipient of the St Petersburg Government Prize. In 2010–2016 he was a recipient of the Sviatoslav Richter Grant from the Mstislav Rostropovich Foundation. In 2016 he was awarded the Yuri Temirkanov Prize. That same year, he received the Special Prize as Best Pianist at the Verbier Festival Academy.

Has appeared at the Yuri Bashmet International Music Festival in Minsk, the Mariinsky Theatre’s International Piano Festival and the festivals Larisa Gergieva and Friends (Vladikavkaz) and Moscow Greets Its Friends. Regularly features in programmes of the St Petersburg Music House.

Performs together with orchestras and gives recitals at major venues throughout Russia, the USA and Europe (Concert Hall of the Mariinsky Theatre, Krannert Center for the Performing Arts (Urbana, Illinois) and the Salle Cortot in Paris among others). In the autumn of 2019 he undertook a tour of cities in Europe (Strasbourg, Luxembourg, Paris and Brussels), in addition to performing a concert on Radio France.

Engagements for the 2020–21 season include recitals in Russia, Switzerland, France and Poland.

Since 2019 he has been an official Yamaha artist.
Information valid for July 2020