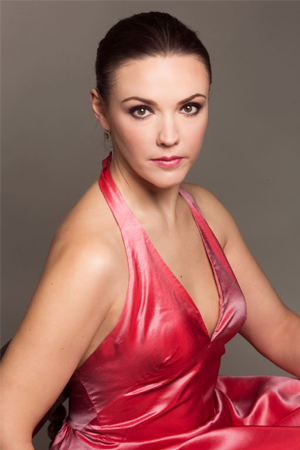 Olga Andryushchenko was born in Moscow. Trained at the Central School of Music of the Moscow State Tchaikovsky Conservatory and at the Moscow Conservatory itself (class of Alexei Lyubimov) and completed a postgraduate study at the conservatory. Studied further as an organist under the tutelage of Alexei Parshin. Later she went on to study under Arbo Valdma at the Hochschule für Musik in Cologne and under Vladimir Krainev on a postgraduate course at the Hochschule für Musik und Theater in Hannover.

Has toured to many cities in Russia, Europe, Asia and America. Has given concerts at such venues as the Great Hall of the Moscow Conservatory, the Tchaikovsky Concert Hall and the International House of Music in Moscow, the Great Hall of the St Petersburg Philharmonic, Leipzig’s Gewandhaus, the Beethoven House Museum in Bonn, the Bozar in Brussels, the Concertgebouw in Bruges and the Cité de la musique in Paris. From 2002–2004 she was a soloist with the Moscow State Philharmonic.

Has lived in Germany since 2002. Collaborates with the Arnold Schönberg Center in Vienna, the Schubert Society in Duisburg, the International Rachmaninoff Society in Darmstadt and the Bechstein Centrum in Cologne and in Dusseldorf.

Has taken part in the festivals Schönberg-Kandinsky in Vienna, A Year of the Music of J. S. Bach in Moscow, Europalia Russia in Brussels, Euregio in Osnabrück, the Oleg Kagan Memorial Festival in Kreuth, the Franz Liszt Festival in Weimar and the Lucca Chamber Music Festival among many others.

In 2014 she took part in filming for a documentary about Wolfgang Bosbach and gave a concert together with Alexei Lyubimov as part of the Monologue festival, which marked the eightieth anniversary of the birth of Alfred Schnittke. In February 2015 she recorded all of Alexander Mosolov’s works for piano in collaboration with the recording company Naxos. Her discography also includes a recording of piano works by Nikolai Roslavets (Naxos, 2017), the solo album Piano Music of the 20th Century (Melodiya, 2018) and an album of all of Mendelssohn’s works for cello and piano (Alba Records, 2018).
Information for November 2019