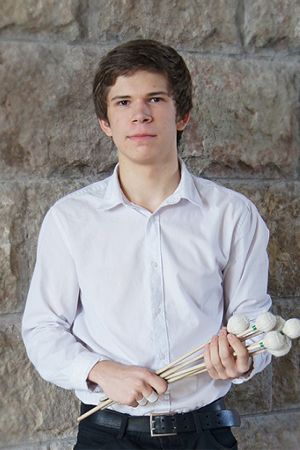 Boris Nikonov was born in St Petersburg. He has studied music since the age of five, commencing with percussion instruments at the age of seven at the St Petersburg Arts Lyceum (class of Boris Estrin, Honoured Worker of Culture).

He is actively involved in concerts by the school and in the city. Has appeared at the finest concert venues of St Petersburg including the St Petersburg State Academic Capella, the Great and Small Halls of the St Petersburg Philharmonic, the Concert Hall of the Mariinsky Theatre, the Ice Palace, the Small Hall of the Conservatoire, Smolny Cathedral, St Peter’s Cathedral, the Jaani Kirik, the Alexander Nevsky Monastery, the Tauride Palace, the Kochneva and Kschessinska mansions and the Pushkin House).

Has performed during the subscriptions Young Talents and A New Year Divertissement of St Petersburg’s Young Musicians (2012, 2013) as well as performing recitals in St Petersburg Moscow and abroad (The Netherlands, Finland, Germany, Sweden, Poland, Lithuania and Italy).

Recipient of a diploma for participating in the IX, Х and ХI international TV competition The Nutcracker.