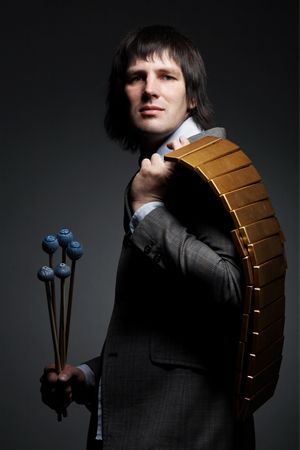 Born in 1971 in Leningrad, Alexey Chizhik graduated from the Rimsky-Korsakov St Petersburg State Conservatory in 1997. Having worked in several symphony orchestras, he now performs both jazz and classical music. He is the only vibraphone player in Russia to use the five-mallet technique. Has collaborated with such musicians as Plácido Domingo, Mstislav Rostropovich, Wynton Marsalis, Mariss Jansons, Andrey Kondakov, David Goloschokin, Arkady Shilkloper, Vladimir Ashkenazy, Krzysztof Penderecki, Eddie Gómez, Larry Porter, Billy Drummond, Andrea Marcelli and JD Walter. Since 2010 he has made appearances with the Ekkehard Wölk Trio (Berlin).

Appears as film accompanist at various venues in St Petersburg as well as touring with programmes of music for silent films. Took part in screenings of retrospective films at the Aurora cinema marking one century since it opened. In 2018 he was jury member of the Italy PAS percussion competition in Pescara.

Alexey Chizhik is currently a part of the trio Cool Train Project. In 2005 he founded the Chizhik Jazz Quartet.

Official Bergerault artist.
Information for May 2021