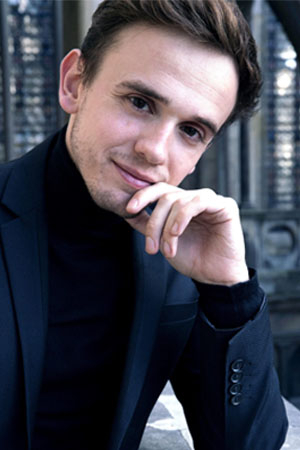 Born in 1990 in Ayherre (Nouvelle-Aquitaine), Thomas Ospital began his musical studies аt the Conservatoire Maurice Ravel in Bayonne, France. There he studied organ with Esteban Landart, completing his studies in 2008 with unanimous recognition of his high level of achievement.

In 2012 he served as young artist in residence аt the Cathedral-Basilica of Saint Louis King of France in New Orleans.

In 2015 the Église Saint-Eustache located in the centre of Paris and home to France’s largest pipe organ appointed him one of its two organists. From 2016 to 2019 he was the first organist in residence of the new organ built by Grenzing in the Maison de la Radio in Paris. Since 2017 Thomas Ospital has been teaching harmony аt the Conservatoire national supérieur de musique et de danse de Paris.

He performs frequently in various countries as a soloist and with choruses and orchestras. With a keen interest in perpetuating the art of improvisation in all its forms, including both liturgical and secular, he displays his talents in accompanying silent films.

September 2017 saw the release of Ospital’s first CD with works by Liszt, and in January 2018 his second CD with works by Bach, Escaich and improvisations was released. In January 2020 he has featured in the recording of Christopher Gibert’s album Stabat Mater.
Information for January 2021