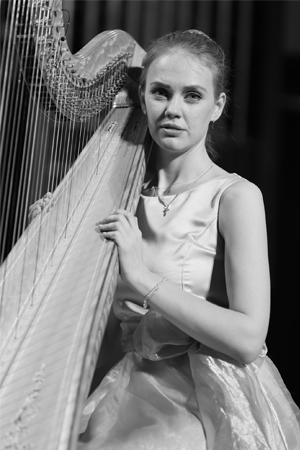 Elizaveta Simonenko was born into a family of renowned harpists. She studied at the Central School of Music of the Moscow State Tchaikovsky Conservatoire (class of Elena Ilyinskaya). She was a student of the Royal College of Music in London from 2006 to 2010. In 2011, Simonenko graduated from the Russian Gnessin Academy of Music (class of Natalya Shameeva), while in 2013 she received her Master’s Degree at the Academy. In 2016, the musician undertook an assistant traineeship at the Moscow Conservatoire (class of Elena Ilyinskaya).

Simonenko is a soloist with the Bolshoi Orchestra and the Moscow Operetta State Academic Theatre Orchestra. She previously appeared with the RCM Orchestra (London) and the National Philharmonic Orchestra of Russia.

The harpist also appeared as a soloist as part of chamber ensembles at Wigmore Hall and Cadogan Hall in London, the Great and Small Halls of the Moscow Conservatoire, the Moscow Philharmonic and at many other famous venues.
Information for March 2019