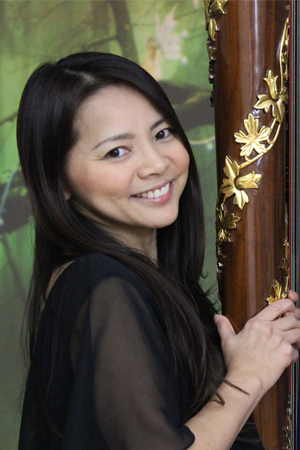 A graduate of Royal Academy of Music in London, England, Miya Otake is an active harpist contributing her talent in performing and teaching based in Vancouver, Canada.

Her beloved 47-stringed instrument has taken her around the glove from Asia, Europe, North and South America. She performed with her sister, a harpist Kaori Otake at Carnegie Hall in New York.

Miya Otake started to play harp at age of seven in Japan. After immigrating to Canada, she continued her musical studies at the Vancouver Academy of Music and Victoria Conservatory of Music. While studying under University of Victoria professor Taka Kling, Miya Otake has won countless awards, and scholarships and appeared in numerous recitals, concerts and TV programs.

After completing her post-graduate studies at the Royal Academy of Music in London, England she pursued further musical and cultural studies in Nice, France. Her teachers include Elisabeth Fontain-Binoche, Marisa Robles, Skaila Kanga, Daphne Borden, Taka Kling, and Taeko Okajima. She has also taken master-classes from many top harpists of the world.

Miya Otake is the founder and artistic director of the award winning West Coast Harp ensemble and Kits Wings ensemble giving opportunities for the young aspiring harpists to perform at diverse venues. She also enjoys being the resident harpist of the Chilliwack Symphony Orchestra and loves collaborating with other local orchestras and musicians.