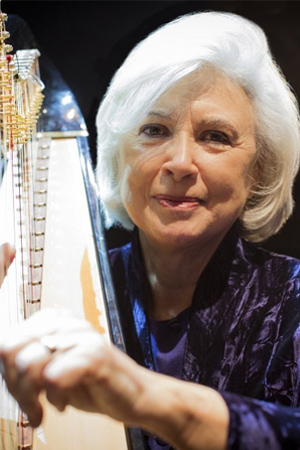 Catherine Michel is a graduate of the Conservatoire National Supérieur in Paris. In 1970, she joined the Orchestre National de Radio France and began her career as a soloist. She has toured in Canada and in the USA. Michel recorded ten harp concertos and little-known works by Castelnuovo Tedesco, Glière, Reinecke, Rodrigo, and Villa Lobos in collaboration with Phillips Records and Vox Records. The harpist has appeared as soloist with many orchestras such as the Orchestre du Capitole de Toulouse, the Luxemburg Radio Orchestra, the Monte Carlo Orchestra, the Jerusalem Symphony Orchestra, the Munich Philharmonic, the Royal Philharmonic Orchestra of London, and the Orchestra Simon Bolivar (Venezuela).

In 1978, she was appointed principal harpist of the Orchestre National de l’Opéra de Paris. Michel has played under such conductors as Leonard Bernstein, Karl Böhm, Pierre Boulez, Sergiu Celibidache, Lorin Maazel, Seiji Ozawa, and Mstislav Rostropovitch. She has taught at the Hochschule für Musik und Theater Hamburg, Hochschule für Musik Detmold, and the Royal College of Music in London. Since 1993 Michel has been a teacher at the International Harp Academy of the Musikhochschule in Zurich. She is also a professor of the Institut d’Enseignement Supérieur de la Musique (IESM) in Aix-en-Provence.

Catherine Michel has discovered and published many music works for harp dating back to the 18 th and 19th centuries, including solo pieces, harp concertos, and training exercises for honing harp-performing skills for harpists. She has also published a book on the repertoire for pedal harp in the 18th century.

As a result of Catherine Michel’s collaboration with composer Michel Legrand, works for harp and symphony orchestra or large jazz orchestra have been created. After recording their own CD, Michel and Legrand appeared in concert at Carnegie Hall in Ney York, the Royal Albert Hall in London, and the Concertgebouw in Amsterdam; at festivals held in Cannes and Gstaad. They have also toured together in Canada, Japan, the UK, Russia, and the USA.