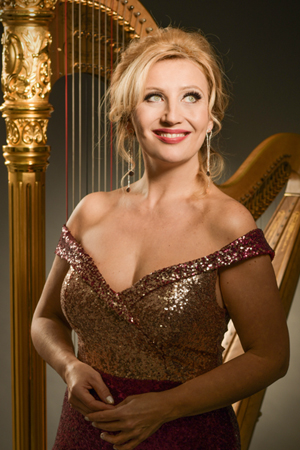 Jana Boušková graduated from the Prague Conservatory and Ostrava University where she studied in the class of Libuše Váchalová. She continued studying at the prestigious Indiana University with Susann McDonald. Jana Boušková is the only Czech harpist who won the world’s most important and acknowledged international harp competition – in 1992 in the USA. In the same year she was awarded the 2nd prize in the competition with the oldest tradition in the world in Israel as the only Czech artist to be invited ever. Among other numerous successes let us name victories at the Concours International de Musique de Chambre in Paris and the Torneo Internazionale di Musica in Rome.

Jana Boušková and Libuše Váchalová are discoverers and authors of some adaptations of distinguished compositions of the Czech repertoire, e.g. Vltava by Bedřich Smetana, or the compositions by Antonín Dvořák and Josef Suk.

Thanks to her distinct artistic successes Jana Boušková rapidly became a very demanded harpist performing on the prominent stages all over the world as a soloist as well as in cooperation with such interpreters like Maxim Vengerov, Yury Bashmet, Patrick Gallois, Lars Vogt, Christian Tetzlaff, Sharon Kam or Mstislav Rostropovich. Later, Jana premiered with Mstislav Rostropovich the compositions by Ravi Shankar in the frame of the festival in Evian (France) among others.

Jana Boušková regularly performs as a soloist as well as in chamber ensembles at important Czech and world concert venues and festivals. The following performances rank undoubtedly among her most prestigious ones: the solo recitals at the Lincoln Centre (New York), the Châtelet Theatre in Paris, the Wiener Musikverein, the Prague Spring and Berliner Festtage festivals among others.

Besides the solo career Jana Boušková devotes herself to pedagogical activity and teaches simultaneously on the Royal Academy in Brussels and the Academy of Performing Arts in Prague. Since 2005 Jana Boušková has been a solo harpist of the Czech Philharmonic Orchestra. She is being regularly invited to participate in world renowned harp congresses and symposiums including International harp competition in the USA, France, Israel and elsewhere and leads master-classes all over the world. She teaches at prestigious schools including the Indiana University in the USA or the Haute école de musique in Geneva. In 1999 she was the artistic director of the World Harp Congress in Prague. Since 2000 she has been a member of the Artistic Board of the Academy of Performing Arts in Prague and the Czech Philharmonic Orchestra.

Jana Boušková has recorded more than twenty CDs for Czech and international labels, radios and television companies. In 2004 EMI published a recording of her concert at the Spannungen festival in Germany. Numerous Czech and foreign contemporary composers have composed pieces for the harpist.

Jana Boušková is an official player of the prestigious Lyon & Healy harp producer and plays the instrument by this company.
Information for March 2019