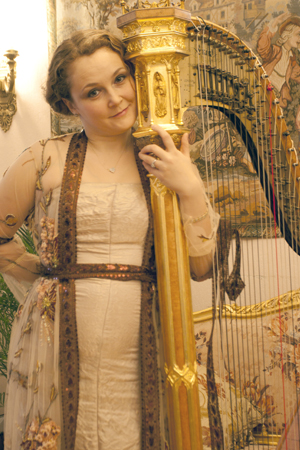 Elizaveta Alexandrova graduated from the St Petersburg State Rimsky-Korsakov Conservatoire. While still a student, she joined the Mariinsky Orchestra, where she performed until 2008. She is currently principal harpist of the St Petersburg Chamber Opera. Alexandrova has appeared in recitals in Sweden, Finland, Germany, Bulgaria, and the Netherlands since 1995. In 1997, she received the 2nd prize and the special prize For Mandatory Programme at the Open International Harp Competition in Moscow, the 1st prize at the International Harp Competition in Varna (Bulgaria), and the 1st prize at the Muse of St Petersburg Competition. In 2002, Alexandrova was a prize-winner at the International Vera Dulova Competition and received a special prize of the Russian Union of Composers. In 2003, she completed her PhD studies at the Moscow State Tchaikovsky Conservatoire (class of Olga Erdeli). Member of the Board of the Russian Harp Society since 2005. The musician has taught at the Petrozavodsk State Glazunov Conservatoire since 2011. She also appears in recitals at the St Petersburg Chamber Opera.
Information for March 2019