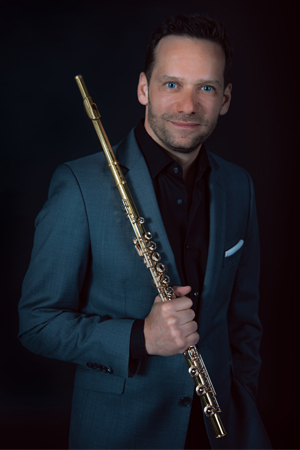 Walter Auer is Principal Flutist of the Vienna Philharmonic Orchestra and the Vienna State Opera.

He was very successful on the flute competition circuit, winning in Bonn, Cremona and at the ARD competition in Munich and has been a part of the international concert scene ever since. He has recorded CDs for Tudor (Zurich), Paladino (Vienna), Camerata, Nami and Meister Music (Japan) and Supraphon (Czech).

Walter Auer is always on the look out to add new pieces to the flute repertoire, either in arranging works originally composed for other instruments (for example the piano-trio by Chopin) or in commissioning and premiering contemporary music. He closely collaborated with the composer Luna Alcalay (1926-2012) who dedicated her works En passant (for flute solo) and Escapade (a woodwind-quintet) to him.

As a very engaging, supportive teacher, Walter Auer presents master-classes and workshops throughout Europe, the USA and Asia. From 2012-2018 he taught at the University for Music in Vienna, the Shobi University in Tokyo and the Jogakuin University in Kobe.

While performing concerts with his wife Julia, a musicologist and traverso player, Walter Auer also plays Renaissance and Baroque traversos made by Giovanni Tardino and Martin Wenner.

Last year he also performed as a soloist with the Vienna Philharmonic in Mexiko City, the symphony orchestras of Kyoto, Kyushu, Yamagata and San Diego.

Engagements for the current season include an extended tour to Japan and Germany with the Stuttgart Chamber Orchestra (world premiere of the orchestra version of Prokofiev’s Sonata op. 94) and a Gala Concert to celebrate Krzysztof Penderecki’s 85th birthday in Krakow with Sinfonietta Cracovia.