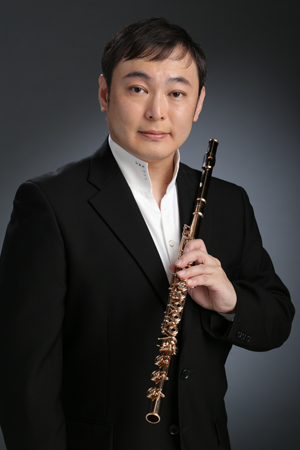 Prize-winner of the prestigious international competitions, notably « Carl Nielsen » and « Jean-Pierre Rampal » in 1998, Kazunori Seo has won attention as one of the world’s outstanding flutists through numerous appearances as soloist, recitalist and chamber musician.

A passionate and dedicated as chamber musician, flutist also pianist, arranger & recording producer. He produce regularly many concerts and recordings for Naxos and his own label Les Ménestrels & Virtus Classics with Patrick Gallois, Svetlin Roussev, Nicolas Dautricourt, Nicolas Baldeyrou, Laurent Wagschal, Jong-hwa Park, Makoto Ueno etc. In 2011, he was commissioned by the Shirakawa-Hall in Nagoya (Japan), arranged two symbolic symphonies to chamber music. Beethoven’s Eroica Symphony for 6 players and Mahler’s 9th Symphony for 12 players. These arrangements got a lot of attention in the Japan music scene.

The flutist Kazunori Seo was born in Kitakyushu (Japan) in 1974. He began his musical studies since the age of 6 years with his parents who are musicians, but it is especially in Paris that he accomplished the essential of his musical studies. He studied flute in Paris with Raymond Guiot, Kurt Redel, Patrick Gallois, Benoît Fromanger and Alain Marion at the Conservatoire National Supérieur de Musique de Paris (CNSMDP) where he was awarded the « Premier Prix » in flute in 1998. He also studied chamber music with Pascal Le Corre, Emmanuel Nunes, Christian Ivaldi, Ami Flammer, and he was awarded at the CNSMDP the « Premier Prix » in chamber music in 1999. He concluded his musical studies with Maurice Bourgue at the CNSMDP.
Information for March 2020